The poster, as we know it, dates back to the 19th century when the innovation and use of high speed colour lithography by Jules Chéret made mass production possible and brought this liberating and exciting art form to the masses. 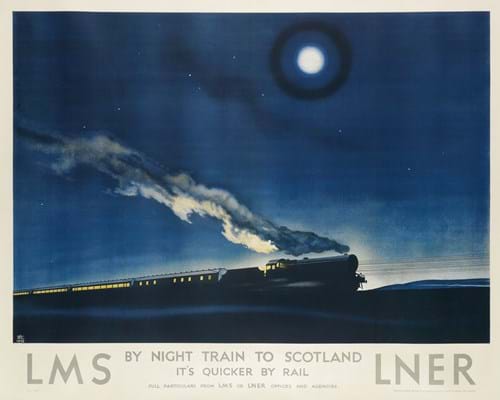 The application of art to commercial and industrial printing spread throughout Europe in the 19th century after high speed colour lithography became possible. It was adopted to advertise everything from bicycles to absinthe.

Today posters remain a highly collectable area of the antiques market thanks to their artistic style, historical interest and wall power to name but three reasons for their continued appeal.

Whilst few people collect posters for purely investment purposes, the idea of hanging a poster which is a talking-point, provides visual enjoyment, and in most cases is an appreciating asset, is an attractive proposition.

Vintage travel posters, along with film, sport and art posters, are one of the largest collecting fields. Nostalgia for an era when travel offered excitement and glamour has fuelled this demand. Collectors can choose from a vast range of designs promoting domestic trips or world travel predominately by rail companies as well as airline and liner companies.

Ski posters are an area which over the last decade has established a solid collecting field combining the themes of travel and sport.

Traditionally, prestigious resorts, usually French and Swiss, have carried a premium, with style, rarity and artist of secondary importance. If a glamorous resort and a top artist combine, such as St Moritz and Emil Cardinaux, then prices can be particularly strong. The market doesn't always respond to this formula, however, and can be volatile.

For example, in 2016, a 1934 poster by the Swiss artist Alex Walter Diggelmann advertising Gstaad sold for £62,000 at Christie’s South Kensington. The result was double the previous high for a poster. The former record poster was sold in the same rooms in 2008 for a 1952 design advertising Russian ski resorts that was pursued by Russian bidders to £30,000. The vintage posters market was not seriously established until the 1980s. Christie's claim to be the first auction house to host a sale dedicated to the category in 1982, although New York auctioneers Swann Galleries also started specialising in the area around the same time.

Interest back then was mainly based in the USA; posters were virtually unexplored in the UK. However, in 1998 the V&A helped raise awareness with the hugely successful temporary exhibition The Power of the Poster.

The London Transport Museum has held regular poster exhibitions at its Covent Garden location since re-opening in 2007.

The annual Ski Sale at Christie’s South Kensington was once one of the high points in the calendar for this collecting field. During their run of dedicated sales, which ran from 2005-17, the average annual growth of poster prices per auction was 26.7% per year (according to data gathered by vintage poster dealer and auctioneer AntikBar). However, that market ceased when CSK closed in 2017 and these lots now fall within Interiors sales at Christie’s.

Since 2018, Lyon & Turnbull in Edinburgh has launched its own Vintage Ski Posters annual sale in January (within larger sales). The auctioneer has also held two London selling exhibitions of vintage transport and recreation posters in association with Tomkinson Churcher.

Furthermore, editions of the most important posters now receive attention from institutions and several established dealers such as AtikBar and Kiki Werth. More can be found via the International Vintage Poster Dealers Association.

Online bidding has also helped turn this market global, yet despite the surge in demand, it continues to be relatively affordable.

There are several factors which determine the value of a travel poster:

1) Print method - posters dating from around 1880 to 1950 were produced using stone lithography that gives the poster a particular colour and texture. This method of production is no longer cost-effective for advertisers, which make vintage originals even more desirable.

2) Originality - to be valuable the poster must belong to the printing designed by the artist originally and for which they used lithographic stone faces.

3) Designer - if the creator is a recognised artist (such as Roger Broders, Emil Cardinaux and Edward McKnight Kauffer) the poster naturally becomes more valuable.

4) Theme - Popular themes such as British Rail, The Underground or posters promoting glamorous locations such as Monaco are considered more desirable.

5) Rarity - Travel posters with a limited production run (particularly during the First World War when fewer were produced) generally demand a higher premium. The location of printing can also be a factor with some posters.

6) Condition and conservation - Travel posters, like all vintage posters offered at auction, are graded from A to D according to their state (ranging from optimum condition through to needing restoration) which can greatly affect the prices they fetch. Many posters are linen-backed, which is done by adding a protective material behind the poster to hold it firm. ‘Paignton, South Devon’ by Charles Pears, printed for the Great Western Railway by Stafford & Co. Ltd., condition A – £2600 at Morphets in January 2010.

Pin-ups from the age of the train