Giving Scotland’s once-neglected art glass further standing in the saleroom, a good range of Monart and Ysasrt glass emerged at auction recently North of the Boarder. 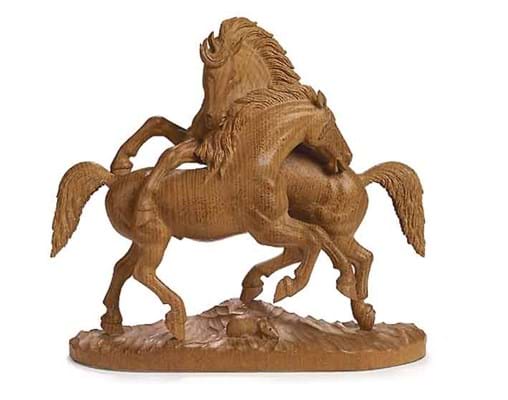 The 38 lots at Lyon & Turnbull's sale in Edinburgh on April 20 made for one of the better selections seen since September 2004 when Ian Turner (who wrote one of the first articles on Monart for the landmark British Glass Between The Wars exhibition at Broadfield House Glass Museum in 1987), decided to sell up at Christie's South Kensington.

Thirty-two of the lots at the Edinburgh sale were from a private collection in the South of England.

Lamps, with lit baluster bases and matching mushroom shades, are among the larger and, accordingly, the most expensive of Monart productions. The two examples here were typical colours: one in a pleasing combination of mottled orange, green and amethyst enamels, the other in mottled green, white, blue and red.

A 7in (19cm) squat ovoid vase (its shape codedGAin the pattern books) is part of the desirable 'stoneware' range - a reference to the distinctive surface texture in imitation of ceramic.

Few pieces of Monart can be so accurately dated. These early issues from a studio which began serious production in 1924 are often iridescent, an effect achieved, it seems, by impurities in the gas supply to the Perthshire kilns. That the gas supply was 'improved' in 1927 (and the effects not replicated in glass production until the 1950s) gives a fairly tight three-year run for these iridescent wares.

Popular at the 2004 Turner sale at South Kensington, and popular again in Edinburgh, was a 10in (25cm) high ovoid vase with a cylindrical neck decorated with dark blue stripes against a mottled blue and green ground. It brought £800 (estimate £400-600).

Also going comfortably above estimates were a 7in (17cm) high globular footed vase (AGshape) with a rare dark and lighter blue body, which made £650, and an 81/2in (22cm) high tapering ovoid form vase (KCshape) with brown stripes to a lemon, orange, yellow and green body which took £720.

Both pieces were enlivened by adding gold powder, or aventurine, into the mix.

Bubble inclusions, achieved by sprinkling crushed charcoal into the glass, were seen to a baluster form vessel with a spreading foot, made in mottled yellow glass with green, orange, light and dark blue, amethyst and pink. It went above hopes at £480, helped by its original factory label.

Like Monart, that just a few years ago had a price ceiling of around £500, it is only recently that the ceramics of Cotswolds Arts & Crafts practitioners Alfred and Louise Powell have also enjoyed promotion to a different financial league.

A few hundred pounds is still quite acceptable for a typical production but a blue and white bowl decorated with eight Gloucestershire views sold by Mallams in Cheltenham at £3100 in May 2004 and, last year, a well-provenanced bowl decorated with a Japanese mountainous landscape took £2600 at Law Fine Art of Berkshire.

Lyon & Turnbull's sale included two impressive comports and covers, each standing 14in (35cm) high and painted to the Wedgwood Queensware blanks with spiralling bands of flowering foliage in green, blue and black. Both carried a painted monogram and a pattern number -427to one and230to the other.

Alfred Powell (1865-1960) was still decorating pots when he was 90-years-old but this duo, with an obvious debt to William de Morgan, were thought to date from around 1920. Estimated modestly at £400-600 each, (the patterns differed slightly so they could not be deemed a pair) they sold at £2600 for a perfect example and £2200 for another with a rim chip.

Aided by the MacIntosh Patrick collection, Lyon & Turnbull have sold more Christopher Dresser (1834-1904) metalwork than any other saleroom in recent times.

John Mackie believes the market is now a little jaded after an embarrassment of riches, so was happy to take £4300 on a silver-plated soup tureen and cover designed for Elkington & Co. c.1885. If saleroom appearances are anything to go by, then the cushion-form tureen - another is illustrated in Michael Whiteway's Christopher Dresser 1834-1904  - is a rarer beast than the better-known tureen and ladle of near hemispherical form made by Hukin & Heath in two sizes.

This 131/2in (34cm) diameter example (there was a suggestion that one of the angular ebonised handles might have been replaced) looked a solid acquisition for a European buyer several bids above the £2000-3000 estimate.

An unusual issue from the inter-War workshop of Robert 'Mouseman' Thompson was a 141/2in (36cm) high carved oak figure of two rearing stallions - perhaps frightened at the oversize mouse beneath their feet. It was superbly done and quite a rarity. It sold at £2300 (estimate £400-600).

A 13in (32cm) high Mouseman figure of an owl perched on a rockwork base and holding a mouse in its talon (a model that is seen occasionally) took £700.

There was predictable trade interest in a bolt of Morris & Co.Craypattern cotton cloth designed in 1884. The blue ground cloth carried printed marks to selvedge and to one end Regd. Morris & Company, and measured approximately 49ft 2in (15m). Enough to re-upholster a suite of Morris furniture, it doubled hopes at £2400.

Outside a small group of associated pictures, which included a characteristic work by Glasgow girl Margaret Wright titledThe Japanese Parasol, which sold at £8000, the sale's top-selling entry was a wool carpet designed by Duncan Grant c.1935 which more than doubled the lower estimate to sell at £7500.

Probably woven by Wilton Royal, which carried out a number of Bloomsbury commissions, it featured baskets of flowers to the angles and was centred by three roses within rings of petals. Illustrated in several publications, the well-preserved 12ft x 10ft 4in (3.66m x 3.16m) carpet was once owned by Lord Clark of Saltwood (1903-83) and came for sale from one of his descendants.