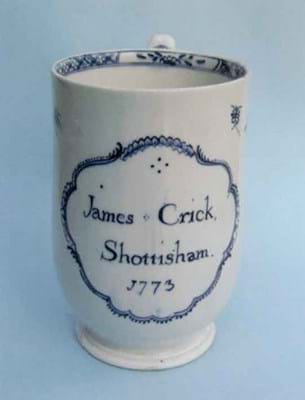 As prices begin to 'correct' in so many over-inflated picture markets, one wonders if the two major auction houses will again look to generate revenue from the traditional antiques which a couple of years ago seemed to offer only small beer.

Should they ponder on the whereabouts of major consignments of English porcelain they will not have too far to look.

The answer will be found at Bonhams and at places such as the Beaconsfield Club, Lowestoft, where specialist auctioneer Russell Sprake sold the collection of the late Peter Scully (1920- 2008) on October 17.

Mr Sprake is, perhaps, the most specialised of UK auctioneers, conducting sales consisting primarily of the bone-rich soft-paste porcelain made in Lowestoft between c.1757-1801. The Scully collection ranks among the best he has sold in a quarter century - and, by and large, the market held up well in the difficult financial climate.

Suffolk born and bred, Peter Scully started his Lowestoft collection after retiring as a brewer in the early 1980s, buying at auctions and through wellknown dealers until relatively recently. He owned some important pieces.

These included a 5.25in (13cm) jug painted with tulip, rose and flower sprays by the enigmatic Tulip Painter and inscribed C. E. Heaman 1776. This piece has appeared in a number of major collections - the Ruben Levine Collection sold by Sotheby's in 1925; the Wallace Elliot Collection (Sotheby's, 1938) and the Russell Colman Collection (Sotheby's, 1948) - and had formed part of the 1957 Lowestoft China Bicentenary Exhibition in Ipswich conducted by Noel Turner.

Although damaged (it has one long and one short hairline) it had the potential to break the auction record for a piece of Lowestoft porcelain which stands at £18,000 paid for a dry mustard pot at Phillips. However, bidding stopped at £12,000 - the winner being a local collector.

No other factory produced so many dated and inscribed wares as Lowestoft, and in this sale there were four documentary pieces.

These included a 3in (7.5cm) polychrome mug, painted with a monogram and date, ER 1793,which sold at £3800, and a 41/2in (11.5cm) cylindrical blue and white mug inscribedRobt Howes 1776,which was in the 1957 bicentenary exhibition and sold here at £2900. Both pieces were damaged: the former with a piece broken and reglued, the latter with a hairline crack close to the handle.

A 6in (15cm), bell-shaped, blue and white mug, in near-perfect condition, was inscribed and dated James Crick Shottisham 1773. This mug, made for a resident of a village in the Deben River valley, was part of a Simon Spero exhibition of 1999.

It carries the decorator's mark number5which is traditionally associated with Robert Allen who - according to William Chaffers' 1863 work Marks and Monograms on European and Oriental Pottery and Porcelain  - began work at Lowestoft in 1757 as a 12-year-old, rising to become foreman then manager at the factory. This mug, which shares many of his calligraphic idiosyncrasies, sold at £6700 (estimate £5000-6000).

As Bernard Watney observed of Lowestoft: "No other English china evokes quite the same sense of belonging to a particular place."

It is for this reason that the overwhelming majority of collectors hail from East Anglia and why they enjoy these sales on 'home turf'.

Lowestoft had two pre-Reformation churches at the time of its porcelain factory: the Good Cross Chapel, which stood at the southern extremity of the town but was lost to the sea, and St Margaret's, with its distinctive copper spire, which survives on the western edge of the town centre.

Robert Browne, the first manager of the Lowestoft factory, is buried there while Robert Allen produced the stained glass of the east windows. Both buildings were depicted on factory wares at a time when the then wealthy port was also becoming a popular holiday resort.

Readers may recall a fragmentary blue and white teapot painted with a view of St Margaret's dated 1767 and inscribedSC(for Sarah Crisp) which made £5400 at Hamptons of Godalming in 2005. Included at Russell Sprake's sale were two printed wares in the Good Cross Chapel pattern, c.1785.

A small, 4in (10cm), teapot and cover with some restoration took £1700 (when these auctioneers sold the Charles Goodey collection in 1990 it made around £500), while a saucer in the same pattern in perfect condition made a punchy £900. An octagonal polychrome spoon tray, painted in underglaze blue, iron red, green and pink with a Chinese garden scene took £3000 (estimate £2000-2500) despite a hairline crack. These so-called Redgrave designs are named after a family with close ties to the factory.

A similar spoon tray in better condition sold at the same price (plus 20 per cent premium) at Bonhams' sale of the Barbara Leake collection in March, while the Bond Street saleroom more recently sold a small 16-sided plate in the same pattern at £1800.

Only three Lowestoft bird models are known. The undecorated 2.75in (7cm) example at Russell Sprake's sale, an unsophisticated garden bird perched on a tree stump decorated with moulded flowers and leaves (the tail is heavily restored), is very much in the style of Bow and dates from c.1780-85.

It had been purchased by Peter Scully from Simon Spero in 2003. The hammer price was £3600 (estimate £2500-3000). Lowestoft pugs are typically seen in the white, but the example here, which sold at £4300, was decorated with pale grey and black markings and enamelled in green to the collar and the base. A related model of a cat, c.1780, with similar decoration (and restoration to one ear and a chip to the foot rim) made £2500 at Bonhams in June 2005.

A 6in (15cm) high milk warmer, or veilleuse, with two mask heads, scallop shell handles and the decorator's mark for Robert Allen, had last been seen on the market in 2000 when Bonhams sold the second tranche of Bernard Watney's collection.

A complete example - perhaps the one which raised £68 when Sotheby's conducted the D.M. Hunting sale in 1968 - survives in the unrivalled collection of the Norwich Castle Museum.

The one offered by Russell Sprake had a long hair crack to the back and was lacking its liner and cover.

No profit was expected on such a quick turnaround and, indeed, it sold at £8000.

Copies of the two auction catalogues from the Warrell collection were offered among the 'warm up' lots at the start of the sale and took £80.

Three of the unsold lots were wares from other factories including a pearshaped pap boat which had been in the Watney Collection, the Billie Pain Collection (sold at Bonhams in November 2003 at £1600) and in a Simon Spero exhibition of 2004.

Boosted by the success of this sale, in 2009 Russell Sprake has decided to hold three, rather his usual two, Lowestoft auctions with sales in April, July and October.