SALVO, the leading architectural salvage and garden antiques fair, is being repositioned to capitalise on the increasing popularity of reclaimed artefacts among upmarket architects, designers and decorators. 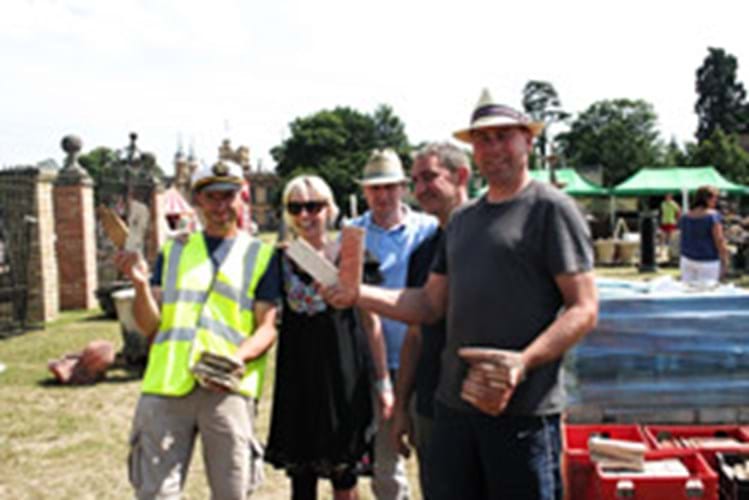 V&V Reclamation’s Ed Pearce, far left, and Jason Davies, far right, with some of the 60 square metres of brick tiles they sold to decorate Jamie Oliver’s restaurant in the Westfield Shopping Centre.

With the battlecry "Steer the fair away from Newark and into eco-build", the event's founder and organiser, Thornton Kay, set out new plans as the 13th Salvo Fair, held on June 25-27 at Knebworth Park in Hertfordshire, came to a close.

"We're going all out to target more dealers and invite selected groups of construction specialists, including developers, hotels and leisure groups, plus architects and landscape designers to trade day," he told ATG. "If there is a market for the big-ticket items at the fair, it will likely come from within the construction specialists groups."

While he and the more established salvage dealers want the fair to regain more of its edge on architectural salvage by "beefing up the serious end", he is still keen to stress the importance of the more generic and popular mainstays of the fair, such as doorknobs, door furniture fittings and small decorative items.

One success pointing to the event's potential as a designer's destination came as this year's fair saw V&V Reclamation sell 60 square metres of reclaimed bricks, cut into tiles, to Jamie Oliver's designer to decorate the chef's new restaurant at the Westfield Shopping Centre in West London

Mr Kay also wants to target the trade more assiduously than has been the case.

"We had a trade morning only on the Friday, June 25, from 11am to 1pm at £15 entry and some of the public came into that on payment of the extra £7 on top of their £8 entry fee as well as the trade and public afternoon on the same day.

"Next year it won't be like this. The public won't be allowed in on trade day."