Bonhams have integrated Lalique back into their broader mix of 20th century design auctions. 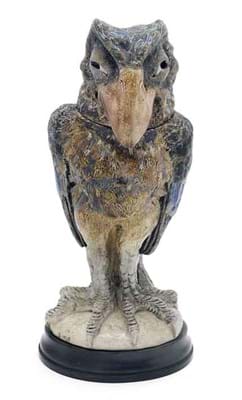 After their first stand-alone sale in 20 years produced patchy results last November, specialist Mark Oliver said the decision was based upon a disappointing return on lots pitched at the lower and middle range, which hampered the November sale's selling rate, with fewer than 50% of lots finding buyers.

Going on the latest results for Lalique from Bonhams' 189-lot decorative art sale held on June 12 in New Bond Street, the change appears to be the right one. Of the 50 lots offered, all bar 13 sold, to total £364,000, down slightly on the stand-alone November sale but produced from 152 fewer lots.

The section also contributed just under half of the £759,750 sale total, with seven Lalique pieces featuring in the top ten lots.

Demand for Lalique has stepped up again in recent years with the market currently awash with plenty of moneyed private buyers based mainly in America, France, Britain, Russia and South Africa.

New buyers to Lalique in particular are incredibly competitive, looking to build collections at the higher-end of the market (in excess of £5000), which goes some way to explaining the lack of demand for middle- and lower-range lots at Bonhams' November sale.

Personal taste is also a factor which can make it an unpredictable market at times and some pieces fluctuate greatly in price as a result.

As a general rule, Lalique values are linked to scarcity determined by such factors as length of production, colours, special finishes, subject matter and the quality of the moulding. Condition is paramount in this collecting field and can greatly affect prices.

The most sought-after pieces of Lalique tend to be René Lalique's cire perdue works - unique creations cast by the lost-wax process where the mould is broken in use.

Bonhams' offering contained a variety of different colour series predominantly dating from the 1920s, when many of Lalique's designs were originally created, and included a number of higher-range plain, opalescent and coloured versions. Over a third of the lots were guided at the high end, with estimates of £10,000 or more.

Black glass is among the rarest colours in this collecting field and, says Mr Oliver, is tough to source. This example was not the most exciting of Lalique designs, but it still proved desirable to a number of parties including a museum. In the end, however, it sold in the room to a European collector for £36,000.

Almost equalling this price was a Frise Aigles clear-glass vase designed in 1911, measuring 12in (31cm) and decorated with an early cameo technique overlaid with red and black enamel. Probably unique, it was unrecorded in Felix Marcilhac's Catalogue Raisonné  published in 1989 - the bible for any Lalique enthusiast.

It had a substantial chip to its base, which was reflected in the low £5000-7000 estimate, but this did not hamper the price and it sold to another continental buyer for £35,000.

A 10in (26cm) high caramel-coloured Archers vase from 1921 was another highlight here, selling just above top estimate for £19,000. Matching this sum, although pitched at a higher £18,000-22,000 estimate, was a slightly earlier 1919 electric blue Perruches vase in the design of budgerigars measuring 9in (25cm). The price was marginally higher than an identical version in the same colour which sold at Bonhams for £17,000 in November.

Best of the Rest

Getting away below estimate, but selling nonetheless, were several other higher-valued lots.

These included a strong opalescent Bacchantes vase designed in 1927 (and still in production today) which took £24,000, a 1921-designed Poissons vase in red glass which fetched £23,000, and a top bid of £19,000 for a clear-glass Serpent vase designed in 1924. Along with other examples in the sale, each of the three lots was accompanied by a duplicate in a different colour which failed to sell - demonstrating the selectivity of this market.

"It's quite often the case that a particular buyer wants to fill a gap in their collection and will just go for the colour that they do not have in that series, and as a result casualties occur," said Mr Oliver.

Outside the Lalique, the sale also yielded strong results, including the sale's top lot. This was a rare and unrecorded Robert Wallace Martin early stoneware bed-warmer modelled as a tortoise, dated to 1880 and measuring 11 x 5in (30 x 15cm).

In excellent condition, made to a good size, bearing the Martin Brothers trademark grotesque features and pitched at an enticing £8000-10,000, it sparked plenty of interest. Contested by both room and phone bidders, it eventually sold to the phone for £38,000.

The holy grail for most Martinware collectors are the Martin Brothers grotesque bird jars, one of which also fetched a top-ten price here. Dating from 1898, it sold for £26,000 against a £15,000-20,000 estimate.

Despite their proven value in the saleroom, this price still came as a surprise to Mr Oliver, who said: "Although it was a little larger than average and only a few are turning up at the moment, it was not a particularly captivating example and had some internal hairline cracks."

Elsewhere, poor condition did little to deter bidders for two Ferdinand Preiss Art Deco figures which were both pursued beyond their estimates.

The first was Spring Awakening, a 14in (37cm) cold-painted bronze and carved ivory figure dated to c.1925, which had a crack along the torso but still fetched £18,000 against a £10,000-15,000. The second was a Con Brio model of a similar size which was missing some of the figure's silver-patinated costume and had a crack down the face. It sold for three times the bottom estimate to make £15,000.