This Lalique ‘cire perdue’ vase was discovered by Anderson & Garland in a house just outside of Morpeth, Northumberland during a routine probate valuation. 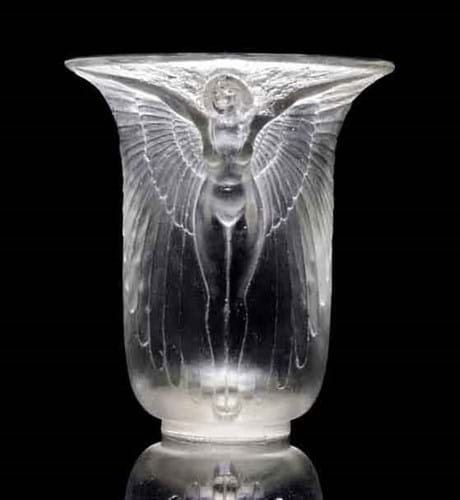 A green 'tide' line suggested the 6¼in (16cm) high vase had been used to display flowers.

Technically challenging and inherently rare, cire perdue (lost wax) casts are the most eagerly sought of the Lalique glass output and this vase was particularly desirable for its subject matter - two winged female nudes with outstretched arms.

In addition to the R Lalique wheel-engraved signature, the base is inscribed No 1/4 and 415-22 (for the mould number and the date 1922) and betrays both a full and partial thumbprint.

Records in the Lalique catalogue raisonné compiled by Felix Marcilhac suggest this vase, titled Deux Figures Femmes Aillées, was created on November 13, 1922, with three other vessels made before November 20. The design was previously known only from a line drawing and this is the only one to emerge on the market.

It was valued at £20,000-30,000, but the interest expressed before the sale at Westerhope, Newcastle, on September 11 suggested it would climb much higher. It did.

Bidding opened at £10,000 but leapt immediately to £100,000, with a pre-emptive strike from one of the two US bidders who exchanged blows over the telephone - one of whom was Mark Waller of Gallery Moderne of Piermont, New York who ended up as the underbidder.

It is also a house record for Anderson & Garland (the previous high was £270,000 for a Kangxi celadon glazed 'flying clouds' water pot sold in these rooms in December 2010) and a record for any 20th century work of art sold at auction outside of London.

Glassmaker turns his hand to silver