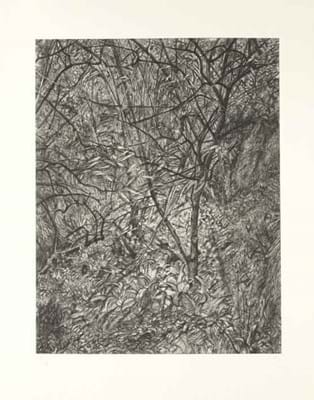 The two giants of modern British art are currently the focus of major exhibitions in London: A Bigger Picture, David Hockney's landscapes show at the Royal Academy, and Lucian Freud Portraits  at the National Portrait Gallery.

And Christie's, never ones to miss a canny marketing prospect, were particularly shrewd in foreseeing this 'Frockney' fever by holding sales dedicated to each artist during the big mid-February week of Modern and Contemporary sales.

Of course, Hockney and Freud were good friends. But while they shared an obsessive devotion to their work, working almost all day every day, the speed at which they worked differed wildly. Famously, when Hockney sat for Freud it took 120 hours, with Freud painstakingly mixing the paints as he went. But when Freud returned the favour, the whole process only took about three hours, during which Freud fell asleep.

The difference between Hockney's rapid, feverish exploration of all manner of subjects, and Freud's laborious, time-consuming fixation with the human form were clearly played out in the two Christie's sales: The Printer's Proof: Etchings by Lucian Freud  at King Street and Hockney on Paper at South Kensington. A 25/20/12% buyer's premium was charged at both sales.

The auction of Freud etchings on February 15 was a true one-off, and you couldn't wish for a better academic provenance for a set of prints. All 47 had been consigned by Freud's printer Marc Balakjian of the Studio Prints workshop, established in 1968 by Dorothea Wight.

Studio Prints had worked with artists such as Auerbach, Kossoff and Rego, and it was Celia Paul, artist and girlfriend of Freud, who recommended the firm.

Freud started working with Marc Balakjian in 1985 and continued to do so for the next quarter of a century, so the etchings in this sale, all printer's proofs, date from 1985 to 2007 and were catalogued chronologically. All were in perfect condition, unframed and untrimmed, from small runs of between ten and 50 prints and many are related to Freud oils, some worked before the painting and some after.

Meanwhile, Hockney on Paper, on February 17 at South Kensington, took a bigger and broader approach - a multi-consignor, 143-lot sale encompassing etchings, lithographs, drawings and photography, spanning a 40-year period, from early student works from the 1950s through to his much-desired Californian pieces, alongside many portraits, photo montages, illustrations and set designs.

As Richard Lloyd, head of prints at Christie's, said after the sale, it was both a tribute to Freud and "a tribute to Marc Balakjian, the master printer who worked with Freud for the last 25 years".

He added: "The auction broke all previous records for Freud and saw participation from many buyers new to this market."

This is interesting as the market for Freud prints has traditionally been fairly trade-dominated, very small, both in terms of supply and buyers, and largely British. His dealers, Marlborough Graphics, kept a tight rein on the release and prices of his editions. The ability to easily compare prices for editions also tends to keep prices in check.

But, according to specialist Tim Schmelcher, new buyers here included some modern and contemporary collectors, alongside American and European interest, including a German institution who bought three lots.

Although trade were buying at the lower levels, it was private buyers who were chasing the top lots, and all of the top three sold to collectors.

Mr Schmelcher noted that bidders came to the sale with very set ideas about which lots they wanted, and this fixation on certain pieces led to the peaks and troughs in prices. There were a few instances when one print sold for over the estimate, followed by another very similar print with the same estimate that went for much less or failed to sell.

Freud's depictions of dogs are his most tender and sympathetic and, arguably, easier to live with, so are popular with a wider pool of buyers than some of his more discomforting nudes. And of course, the English do love their dogs.

Nevertheless, the price for Eli seems to be something of an anomaly, as only five lots previously, a similar portrait of Freud's other whippet, Pluto Aged Twelve, from 2000, also from an edition of 46 but smaller at 17in x 2ft (43 x 60cm) and with a hand entering the composition from the top right corner, stuck more firmly to its £50,000-70,000 guide to sell at £55,000.

Quite why Eli proved more popular than Pluto on this occasion is unclear, althoughEliis a particularly finely modelled and printed depiction of a sleeping dog, displaying that delicately feathered line of Freud's drawings, while Pluto has a rougher, looser quality.

From a lean whippet to 20-stone 'Big Sue'. Following closely behind Eli was a head and shoulders portrait of the now famous Sue Tilley, Woman with an Arm Tattoo from 1996.

Freud's rendering of the folds of Sue Tilley's face pressing against her hand as she dozes shows his huge skill and the 2ft x 2ft 6in (60 x 82cm) etching, from an edition of 40, sold to a collector for £100,000, double the top estimate.

Unsurprisingly, the bulk of the prints were either portraits or full-length nudes, with many of his best-known sitters, such as Leigh Bowery and Lord Goodman, Freud's lawyer, but there were also studies of plants and trees, popular with some but not all collectors.

While the Freud sale illustrated a very private artist, Hockney showed a man who, in the words of Richard Lloyd in the catalogue foreword, "never forgets that he is engaged in a public, rather than private, pursuit".

Not surprisingly considering his sell-out A Bigger Picture show at the RA, the CSK view for the Hockney on Paper< sale was packed, but while the RA show restricts itself to landscapes, the sale brought together a good range of Hockney's many other stylistic incarnations.

For specialist Alexandra Gill, working on a single-artist sale was a real treat and this one was three years in the making, during which time she became increasingly interested in Hockney's work. Finding material was an immense task and consignments came from all over, but Christie's soon realised the breadth of Hockney's appeal.

Some heavy cross-marketing with the RA exhibition brought in an "enormous amount of new buyers", and these serious Hockney lovers joined seasoned print collectors and some big modern and contemporary buyers .

Despite some trade interest, it was strong private bidding that led the sale and Alexandra Gill described the response as "sensible shopping, people didn't go overboard".

It is Hockney's vivid Californian swimming pools of the 1970s that tend to make the headline prices, bolstered by a strong American market for these pieces.

But the earliest lot in this sale, a particularly unusual and rare self-portrait from 1954, shows the young Yorkshireman when he was just 17 and highlights Hockney's admiration of the painter Stanley Spencer - he even modelled his appearance on Spencer, hence the fringe and gawky prescription glasses.

The signed and dated lithograph was one of five proofs (according to the Scottish Arts Council) printed by Hockney when he was at the Bradford College of Art under the tutelage of Derek Stafford, who encouraged him to apply for the Royal College of Art.

Alexandra Gill explains that such a piece was tricky to estimate, with no auction precedent, but she was pleased that they had pitched it about right, as it sold at a mid-estimate £18,000.

Another 1954 lithograph in colours, again one of approximately five proofs printed by the artist while at the Bradford College of Art, was Fish and Chip Shop, a quintessentially British depiction of Hockney's local chippie, which went at a double-estimate £16,000.

A drawing from Hockney's quite different life across the Pond a decade later made the top price at the sale.

Painted after he returned to the city for the second time in the late 1960s, Los Angeles is a reduced view of one of the city's modernist surburban houses with its manicured lawn set against a bright blue sky. It was drawn in 1967 when his exotic new surroundings brought about a stylistic turning point in his work.

The main casualty of the sale was the projected best-seller, a set of A Rake's Progress, a reworking of Hogarth's series made after Hockney returned to the UK from his first visit to New York in 1961, charting the adventures of a young gay man in a city in which he casts himself as the anti-hero.

The variance in interest across Hockney's stylistic phases is worth noting.

Some of his early 1970s flower prints did well thanks to their decorative appeal, such as the Rue de Seine interior, a 1971 etching and aquatint numbered14/150, which doubled the low estimate at £24,000. More difficult are his photographic collages of the early 1980s, which Christie's were pleased to get away on low estimate.

Perhaps due to their idiosyncratic sense of humour, his wry, witty illustrations for the Brothers Grimm fairytales from the 1960s, a far cry from those brightly coloured pool scenes, attract more British interest. The CSK sale featured a complete portfolio of 39 Grimm etchings from 1969-70, with the additional suite of 39 etchings, the justification signed in pencil and numbered 61/100.

All of the 2ft 2in x 19in (65 x 48cm) sheets were in excellent condition and in the original dark blue calf portfolio box, and the portfolio sold at a mid-estimate £45,000.