Did a diminutive fruitwood carving sold by Knowle Auction Rooms relate to one of the most tumultuous periods of British history – the Act of the Supremacy under Henry VIII? 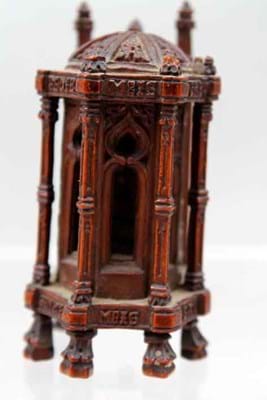 The vendor had acquired the curious 3in (7cm) devotional object formed as a hexagonal temple as part of a box of junk at a house sale less than ten years ago. He, like the auctioneers who sold it, was unsure of its precise origins but both saw enough of its jewel-like qualities to hope it might improve upon its estimate of £400-600.

But what did that complicated series of Latin inscriptions, motifs and figures, buried under a thick layer of dust, represent?

The Latin inscription framing the 'temple' is a quotation from Psalm 118:105 and translates as: Your word is a lamp to my feet, and a light to my paths, a theme repeated with the words Tenebras Quam Lucem (from darkness into light).

To the centre is a figure group wrapped in a ribbon inscribed with the quotation from John 1:29: Ecce Agnus Dei, ecce qui tollit peccata mundi (Behold the Lamb of God who takes away the sins of the world).

A peg to the base (and perhaps a knop to the dome now missing) allows this to rotate so each of the three figures can be viewed between a series of arches.

But this is more than just a personal spiritual aid. The phrase Vive Le Roi appears close to a beautifully carved crowned double rose - symbol of the Tudor monarchy.

And does one of those three central figures not bear a passing resemblance to the king who, by Act of Parliament in November 1534, was declared "the only supreme head on earth of the Church of England"?

Certainly, despite the loss of a foot and a finial, this was an object with great potential and one that prompted plenty of bidding at the sale on April 9  before it sold to a specialist London works of art dealer at £7500. With hindsight, that could just prove a relatively modest sum.