Anthony Pratt, managing director of The Canterbury Auction Galleries, has been portrayed as The Knight from the Canterbury Tales in a mural unveiled earlier this month in the Kent city’s high street. The artwork comprises a large bronze statue of Geoffrey Chaucer and a plinth decorated with a mural depicting the characters featured in Chaucer's Prologue to the Canterbury Tales.

The characters in the mural are depictions of personalities with a Canterbury connection, in a re-working of Thomas Stothard's painting of the Journey to Canterbury which hangs in the Beaney Library in Canterbury.

The Canterbury Auction Galleries is one of the sponsors of the project and Pratt has been depicted as The Knight alongside actor Orlando Bloom (who was born in Canterbury) who is depicted as The Squire, and retailer Hugo Fenwick of Fenwick department stores who is The Merchant. There are 29 pilgrims mentioned in the Canterbury Tales. The plinth of the Chaucer statue in Canterbury city centre depicting the Canterbury Tales with figures from the city - including The Canterbury Auction Galleries' managing director Anthony Pratt - as the characters.

The mural encircles the plinth of the statue and resembles a horse’s hoof. It features a woodcut of the Tabard Inn which can be used for rubbings to be taken away as a souvenir.

Fundraiser Pam Doyle said: “Thanks to a very generous first donation of £5000 from Mr Anthony Pratt, the society promoted an international competition to commission the sculpture and plinth.”

The sculpture was created by Kent sculptor Sam Holland after donations were collected by Canterbury Commemoration Society and the plinth was created by the Yorkshire based sculptor Lynne O'Dowd.

Previously the society installed statues of King Ethelbert and Queen Bertha on the eastern side of the city.

Pratt, who is also celebrating 25 years of owning the auctioneer, told ATG: "I am very proud to have been involved. It is very important to have statues in a city and until the society created King Ethelbert and Queen Bertha we did not have any. This Chaucer sculpture is fantastic. We wanted to give something to the city to share and it is also important for visitors and tourists." 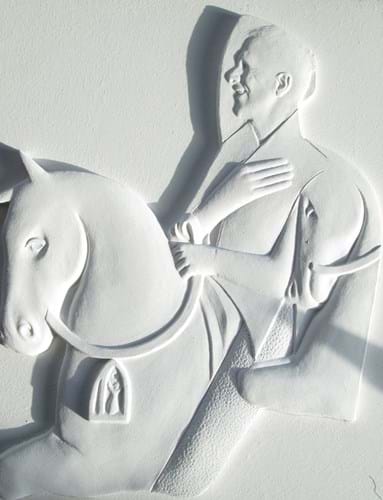 A maquette of Anthony Pratt, managing director of The Canterbury Auction Galleries, as The Knight from the Canterbury Tales as part of a sculpture and plinth artwork in the Kent city.

The statue and plinth are now displayed on Canterbury High Street, at the junction of Best Lane, in the city centre where pilgrims to the cathedral passed.