A record price for a work by Sir Lawrence Gowing (1918-1991) came at the latest fine art sale held by Brightwells of Leominster. ‘Mare Street, Hackney’ by Sir Lawrence Gowing that made a record £40,000 at Brightwells of Leominster.

The painting depicted a double-decker tram negotiating a bend in Hackney’s Mare Street and was painted in 1937-1938when the London-born artist and art historian was still a student.

The location was recently referred to by Time Out magazine as part of the ‘hipster heartland’ but, back in the 1930s, it was one of East London’s industrial areas undergoing a programme of slum clearance.

At the time, Hackney was one of a number of metropolitan boroughs identified as having unsatisfactory housing by the London County Council. Trams though had been introduced in the area in the late 19th century were playing an important role in helping the locality develop.

Gowing was a member of Euston Road school of artists and Mare Street, Hackney was deemed an important example of the group’s output. The 2ft 4in x 3ft (71 x 91cm) oil on canvas was a known work with a well-documented exhibition history.

It had been originally shown at The Storran Gallery in Piccadilly, London in 1938 before being exhibited three years later at the Ashmolean in Oxford as part of dedicated show of works by members of the Euston Road group.

Indeed, it was picked out by the critic Clive Bell as “the surprise of a surprising exhibition”.

The picture was also praised by fellow artists Claude Rogers (who referred to the work affectionately as ‘Lawrence’s tram’) and Graham Bell who reproduced it an 1940 edition of The Studio magazine in an article about contemporary British art at the time.

More recently, the painting was exhibited at the 1987 Royal Academy exhibition British Art in the 20th century.

Brightwells estimated the picture at £7,000-10,000, a level that may have been informed by the previous auction high for Gowing – the premium-inclusive £11,950 for Self-portrait in Oakleigh Avenue from 1936 which sold at Christie's in November 2003. At the sale in Leominster on July 27-28, it drew biding well beyond these predictions before it was knocked down at £40,000 to an anonymous UK buyer.

The drawings depicted views along the River Wye and included views of Hereford, Monmouth and Builth Wells and were variously dated from 1794-1814. 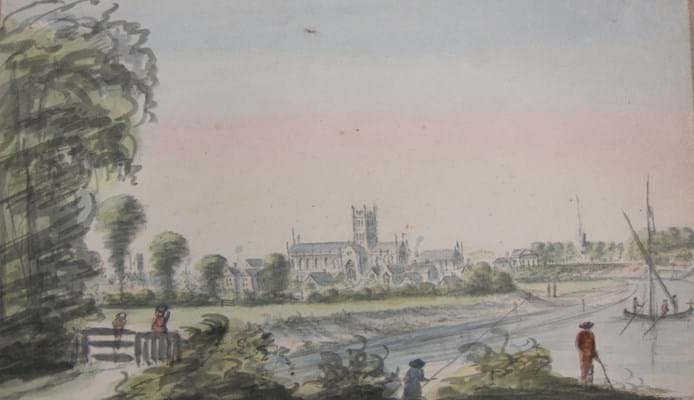 The artist travelled widely after 1811 and published a series of views from his voyage with Captain Prendergast in his 'Journal of a Voyage to India and China' in 1814. His works are not frequently seen at auction and these examples, which ranged in size up to 6.5in x 10in (16.5 x 25.4cm), were laid down on the folios in the early 19th century album.