A new record for a Star Wars production figure was established at Vectis' latest sale when a French issue of Boba Fett, the memorable bit-part character in ‘The Empire Strikes Back’, sold for £21,000. 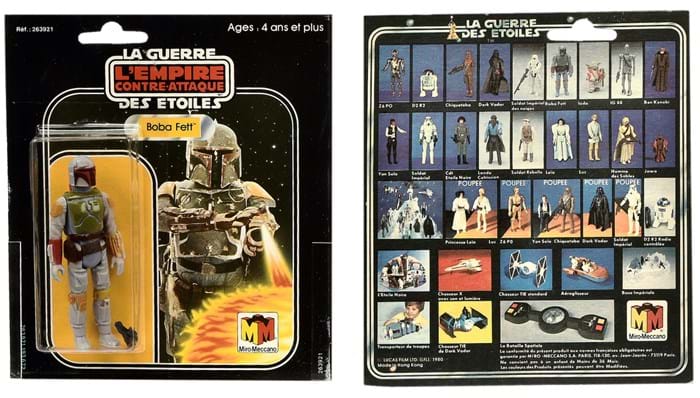 The figure formed part of a collection – deemed to be the best to ever come up for public auction – that had been 40 years in the making. Many of the pieces had been on display in a European museum before reaching Thornaby near Stockton-on-Tees.

All carded production figures of Boba Fett are very desirable. The figure was initially available only as a mail order freebie for those who had bought other models.

When Vectis sold the Craig Stevens collection in 2013, the Palitoy version of this figure, preserved in mint condition on its un-punched card back, took £15,000. The French version, retailed by Meccano, is thought to be rarer still. This example was deemed near mint with the square punched card back rated as ‘good plus’. Estimated at £4000-5000, it sold to an American buyer.

Original packaging is all-important in Star Wars collecting but there are exceptions. From the same collection was a figure that has assumed legendary status among Star Wars collectors: the Rocket Firing Boba Fett. Modelled in grey-blue plastic in advance of mass production by the Kenner factory in Ohio, it would forever remain a prototype figure. Fears that children could potentially choke on the small red rocket led to its demise.

The example here – authenticated by the US-based Action Figure Authority – carried an estimate of £15,000-20,000 and sold on its lower estimate.

In a Whirligig at the £4800 return of Mr Turnip

Do not lose your marbles…