Battle of Culloden letter 1746 to be contested at Stroud auction

While relations between the English/Unionist and the Scottish powers-that-be are not exactly cordial at the moment, hopefully it will not lead to battle. If a referendum is indeed held to decide the fate of the union, a ballot rather than the bullet should be sufficient. 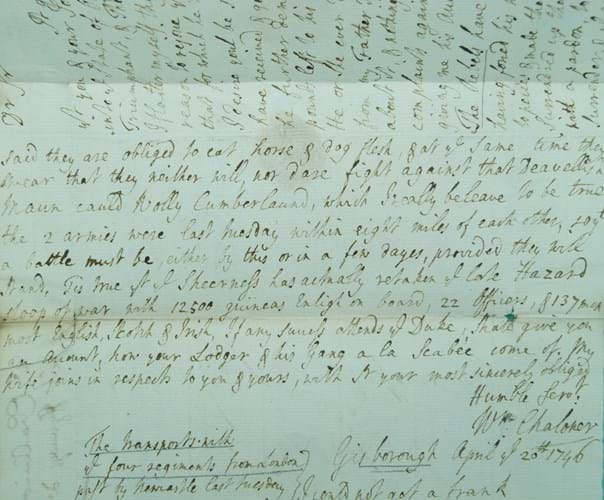 A detail from a letter detailing the aftermath of the Battle of Culloden in 1746 to be offered in the April 12 sale at Stroud Auction Rooms estimated at £1500-3000.

But 271 years ago it was a very different matter. The Battle of Culloden marked the end of the Jacobite Rebellion and Bonnie Prince Charlie’s dreams of taking the throne.

A letter to be offered on April 12 at a Gloucestershire saleroom gives a glimpse into the aftermath of the defeat of the Scottish force in what became the last large-scale battle to be fought on British soil.

Stroud Auction Rooms has estimated this slice of history, consigned by an anonymous vendor, at £1500-3000.

The letter dated April 20, 1746 - four days after the fight - is written by a William Challoner and addressed to a ‘Mr Mills, Attorney at Law at Leeke, Staffordshire’.

It initially deals with a will, payment of legacies and so on, but then continues with news of the battle.

Lyn Bowkett of Stroud Auction Rooms says: “The letter refers to troops being ‘cut to pieces’ and several hundred having surrendered. The writer says the remaining soldiers are short of provisions and eating horse and dog flesh, and that he does not think they will dare to fight ‘Nolly Cumberland’.

“The writer later refers to four regiments being transported from London having reached Newcastle a few days previously, and that it is hoped they ‘are landed by this’ i.e. by the date of the letter.

“The letter is written on one side of a single sheet, then folded and addressed on the outside. It is labelled ‘by Stone bag’ which is of interest to postal history enthusiasts – it was essentially going into the bag headed for Stone in Staffordshire.”

‘Nolly Cumberland’ was William Augustus, Duke of Cumberland (1721-65), commander of the British army at Culloden. He gained another, much better-known nickname after the brutal repression of the Jacobite Rebellion: ‘Butcher Cumberland’.

The rest of his military career was not as successful. A year before Culloden he was soundly defeated by the French at the Battle of Fontenoy in the War of the Austrian Succession (1740-48) and lost at Lauffeld afterwards, in 1747.

In the Seven Years War (1756-73) his agreement to give up Hanover led to his dismissal by his father – who happened to be King George II.

As with support for independence in Scotland today, the 1745 rebellion was not as clear-cut as it might appear, as England v Scotland. Not all of Bonnie Prince Charlie’s army were Highlanders for a start (and included Scottish and Irish troops in French service), and Cumberland’s army can be seen as more Hanoverian than British. Not to mention the Highlanders and Lowlanders actually fighting for Butcher Cumberland.