Sometimes luck plays a big part in what treasures a specialist will find on a valuation. 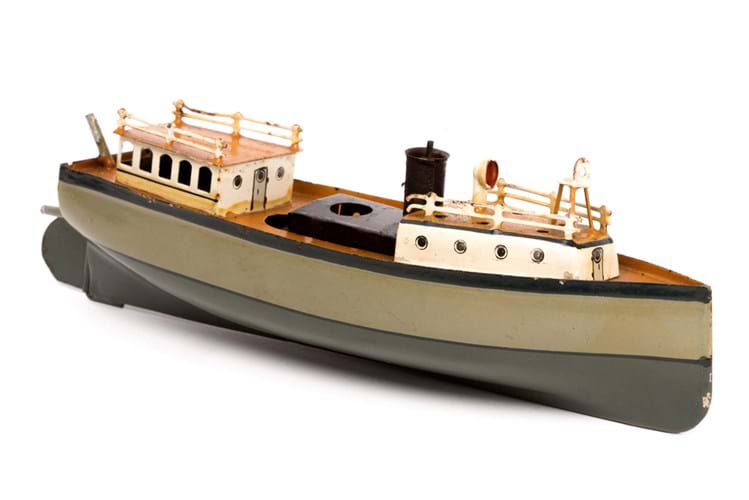 When Glenn Butler of Wallis & Wallis visited an elderly gentleman’s property in the West Country he found a huge collection of diecast and tinplate toys which had been gathering dust and much worse for nearly 50 years.

Many of the items towards the bottom of the ‘pile’ had suffered from rust and the paintwork had rotted away.

However, fortune favoured the Lewes auctioneer: one of the items on the top was a simple but robust and “very rare” tinplate German Märklin 1930s toy boat which end up selling for £11,500 (15% buyer’s premium) in the March 27 sale, against an estimate of £700-1200.

Further luck meant the vendor had cleaned some of the timplate items over the years, and indeed after a good but gentle scrub the boat came out in remarkably good condition.

On the sale day in Lewes, West Sussex, strong interest emerged from several quarters, including three phone bidders, the internet, commission bids and in the room. It came down to two – a Swiss phone bidder and an American online – before it was hammered down to the latter.

Butler said he could find only one other example of this Märklin model and other experts he consulted confirmed the rarity.

He added that it was a “real shame” so many of the toys in the collection had been damaged over the years, but enough survived to sell in two parts (the first was offered in February) and around 100 lots still made for an impressive hammer total of £28,750.

The ‘put-put’ style steam-powered boat was just 26cm (10in) long. The much larger, earlier and far more ornate Märklin boat models in the right condition can make tens of thousands of pounds.

An exceptional 2ft 1in (62cm) spirit-fired, steam-propelled model of the British battleship HMS Terrible sold for £76,000 at Special Auction Services of Newbury in April 2012.

A year later, another Märklin ‘first series’ battleship, contemporary with HMS Terrible, made at the height of the Göppingen factory’s creative genius c.1905, sold for £57,000 at SAS. The Sachsen, a 2ft 1in (62cm) spirit-fired vessel was loosely modelled on the Siegfried class of the Imperial German Navy.