The latest series of Russian art sales in London generated a total of £39.2m (including premium) – roughly on a par with the £38.03m total at the equivalent series last year. A 1783 Guadagnini cello belonging to the great Mstislav Rostropovich – £1.6m at Sotheby’s.

Here is ATG’s selection of seven highlights from the auction this week which include an instrument owned by the great cellist Mstislav Rostropovich and a giant silver-gilt and enamel drinking vessel. A monumental silver-gilt and cloisonné enamel kovsh made by Feodor Rückert in the early 20th century – £400,000 at Sotheby’s.

Among the lots bringing the most spectacular competition at the latest series of Russian art auctions in London was a monumental silver-gilt and cloisonné enamel kovsh (a type of drinking vessel) by Moscow maker Feodor Rückert.

Measuring an extraordinary 18in (46cm) long, it was offered at Sotheby’s Russian Works of Art, Fabergé and Icons sale on November 27. It dated from 1908-1917 and had a partially visible maker's mark in cyrillic for the goldsmith who worked with Carl Fabergé from 1887. Distinctly Russian in form and style, it surpassed an estimate of £50,000-70,000 and was eventually knocked down at £400,000. A portrait miniature of Count Alexei Ivanovich by Vladimir Borovikovsky – £85,000 at Sotheby’s.

Sotheby’s also offered an impressive collection of portrait miniatures from the collection of Dr Erika Pohl-Ströher which was topped by this example by Vladimir Borovikovsky showing the face of soldier and statesman Count Alexei Ivanovich, who served under Tsar Alexander I. It sold for £85,000 against a £5000-8000 estimate. Sotheby’s claimed the top lot of London’s Russian week of sales when a large genre scene by Konstantin Makovsky (1839-1915) sold at £3.6m at its Russian Pictures sale. Selling above its £2m-3m estimate, Blind Man’s Bluff set an auction record for the artist. A 1783 Guadagnini cello belonging to the great Mstislav Rostropovich – £1.6m at Sotheby’s.

The stand-alone auction of art, jewellery and musical instruments from the collection of the cellist Mstislav Rostropovich and his wife, the soprano Galina Vishnevskaya added a total of £4.2m to the bottom line at Sotheby’s. Leading the auction was a masterful 1783 Guadagnini cello which was knocked down £1.6m. The sale marked the first time any of Rostropovich’s personal musical instruments had been sold. A first edition of the first part of Pushkin’s Evgenii Onegin from 1825 in its original paper cover – £55,000 at Christie’s.

As well as a £7.14m Russian art sale, Christie’s also offered highlights from the collection of Russian first editions and manuscripts assembled by Chicago lawyer R Eden Martin on November 28. Among the lots was a rare copy of the first part of Pushkin’s Evgenii Onegin from 1825 in its original paper cover. Estimated at £25,000-35,000, it was bid to £55,000. 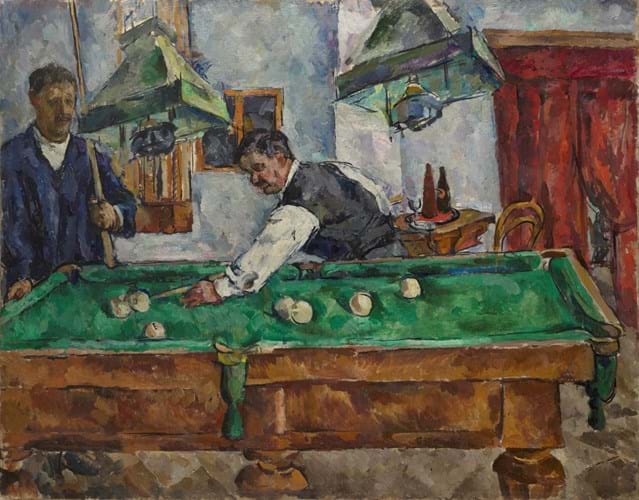 ‘The Game of Billiards’ by Petr Konchalovsky – £1.3m at MacDougall’s.

MacDougall’s reported a total £6.32m from its Russian art sale on November 28. The sale was led by this painting by Petr Konchalovsky (1876-1956), that was knocked down at £1.3m against a £1.5m-2m estimate. The Game of Billiards dated from 1918 and depicted the artist himself with fellow avant-garde artist Aristarkh Lentulov. A jewelled and enamel kovsh by Fabergé workmaster Michael Perchin – £190,000 at Bonhams.

Bonhams’ Russian sale on November 28 raised £2.73m and among the lots bringing demand was this jewelled and enamel kovsh by Fabergé workmaster Michael Perchin. It had been presented by Emperor Nicholas II in 1896 to Victor Albert Francis Spencer, 3rd Baron Churchill (later 1st Viscount Churchill), and had descended through the Churchill family.