A Dutch Old Master painting looted by the Nazis after the Battle of Arnhem but now returned to its rightful owners after 73 years has sold at Sotheby’s for £1.6m. 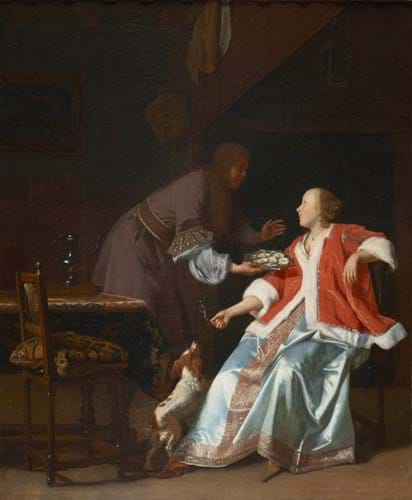 The Oyster Meal by Jacob Ochtervelt (1634-1682) was offered with a £1.5m-2.5m estimate but the auction house had arranged an ‘irrevocable bid’ in advance of the sale, meaning it was always bound to sell on the night.

At the auction it was knocked down at £1.6m to a telephone buyer bidding through Sotheby’s senior director and head of Old Master paintings sales Andrew Fletcher.

It was described by Sotheby’s as “one of Ochtervelt’s finest surviving works”.

The 21 x 17.5in (54 x 45cm) oil on canvas was theatrically lit and finely coloured, and the sum fetched was the second highest price for the artist, only behind the $4.42m (£2.68m) including premium paid for an interior scene with a child and nurse that sold at Sotheby's New York in January 2014.

The painting from 1664-5 depicts a roué offering a young woman a plate of oysters, a long-standing symbol of seduction. It was one of 14 paintings stored by the doctor and collector Joan Hendrik Smidt van Gelder in a bank safe in Arnhem which were seized in 1945 by Helmut Temmler, a former Hitler Youth leader and head of a German command unit.

After being taken to Düsseldorf, the painting could not be traced after the end of the Second World War despite attempts by Smidt van Gelder and the Dutch government to locate works from the collection.

According to Sotheby’s catalogue, the picture had passed through the Düsseldorf art trade and then went to Switzerland. It was later acquired in 1971 through London dealer Edward Speelman by businessman and property developer Harold Samuel.

Samuel built up one of the finest collections of Dutch art in the UK which he bequeathed to the City of London on his death in 1987. The Oyster Meal then hung in London’s Guildhall until last year when the London-based Commission for Looted Art in Europe helped secure an agreement for its return to the 97-year-old daughter of the original owner, Hetty Bischoff van Heemskerck, and her family who were in the room to watch it sell.

Following the Sotheby’s sale, the money will now be divided between the 20 heirs. ‘Portrait of a Venetian nobleman’ by Sir Peter Paul Rubens – £4.6m at Sotheby’s.

The Sotheby’s auction was led by Portrait of a Venetian nobleman by Sir Peter Paul Rubens (1577-1640). The oil on oak panel drew a two-way telephone battle and was knocked down at £4.6m against a £3m-4m estimate.

Also selling on the phone but below estimate was Walton Bridges by Joseph Mallord William Turner that fetched £2.8m against a £3m-5m estimate. Among a number of Dutch and Flemish pictures bringing lively competition was a still life with flowers in a glass vase surrounded by insects and a snail by Clara Peeters (fl.1607-1621). It overshot a £250,000-350,000 pitch and was knocked down at £520,000 to dealer David Koetser who was bidding for the National Gallery of Art in Washington. The price was the highest at auction for an oil on copper by the artist.

In the press conference immediately following the sale it was announced that Old Master dealer Otto Naumann was coming out of retirement to join Sotheby’s as senior vice president and client development director in its Old Master paintings division.