The oil on canvas of an Italian mastiff overshot a £80,000-120,000 estimate and was knocked down at £570,000, posting the highest auction price in the English regions so far this year.

It sold to a telephone buyer who saw off another interested party on the phone as well as a bidder standing at the back of the room.

Identified as the second only known portrait of a dog by the Bolognese painter Giovanni Francesco Barbieri, known as il Guercino (1591-1666), the 22in x 2ft 6in (56 x 76cm) oil on canvas set a record for a piece of fine art sold at Cheffins.

It came to auction from a Suffolk country house having been bought by the vendor’s great-grandfather in Rome in 1850.

While previously unknown to scholars, the attribution to il Guercino was endorsed by Dr Nicholas Turner, an authority on the artist’s work, and by John Somerville, senior curator of the Lobkowicz Collection, Prague. The painting depicts an Italian mastiff in a mountainous landscape which the auctioneers thought may well have been the artist’s own dog. While dogs feature in other Guercino paintings, the only other known canine portrait is Portrait of the Aldrovandi Dog which sold at auction in the 1970s and is now in the Norton Simon Museum in Pasadena, California.

Elsewhere at the Cambridge sale, a portrait of a lady with a small spaniel believed to date from c.1600 was consigned separately, having come via family descent to a private London owner.

Catalogued simply as ‘English School’, it is believed the sitter was a member of Queen Elizabeth’s court, possibly a maid of honour. 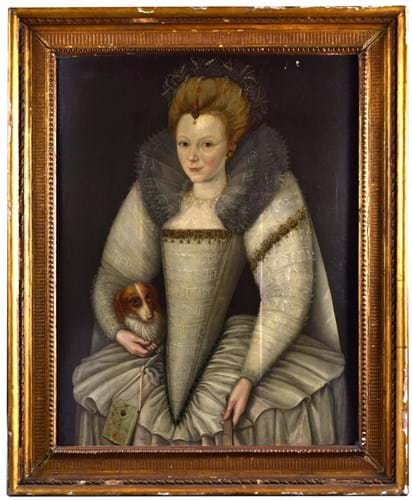 Catalogued simply as ‘English School’ and believed to date from c.1600, this portrait of a lady took £54,000 at Cheffins.