Record for a Rembrandt print at Christie’s Old Master sale

Christie’s latest evening sale of Old Masters in London generated a premium inclusive total of £31.2m with records posted for painting by Gerard David (c.1460-1523) and a print by Rembrandt (1606-69). The rare Rembrandt drypoint from 1655, Christ Presented to The People (‘Ecce Homo’), is among the most sought after print works by the artist and only eight impressions of the first state of this large print are known to still exist.

Seven of these are in museum collections, including the British Museum, the Met Museum, the Ashmolean Museum and the Louvre, leaving the work at Christie’s as the last-known example in private hands.

It came to auction from the collection of the late Samuel Josefowitz who died in 2015 and was one of the most scholarly Old Master print collectors of his generation.

Christie’s offered the work with an ‘estimate on request’ which was in the region of £2.2m-3.5m, an unprecedented level for an individual Rembrandt print. On the night, it sold at £2.2m to a telephone bidder making the highest price ever at auction not just for a Rembrandt drypoint but also any Old Master print.

The previous record according to the Art Sales Index was £410,000 for an impression of Christ crucified between two thieves from 1653 that sold at Christie’s in December 2006.

Elsewhere at the sale, a prolonged competition came for a version of The Holy Family by Gerard David (c.1460-1523).

The oil on oak panel had been in a family collection for more than a century before it surfaced at a sale at Christie’s New York in 2003, where it sold for $999,500 including premium.

Having since had its striking tonal quality revealed after the removal of surface dirt, yellowed varnish and old retouching, it was offered here with a £1.5m-2.5m estimate and, on the night, drew three phone bidders prepared to go over to £3m.

It was eventually knocked down at £4.1m (£4,846,250 with premium) to a buyer bidding through Christie’s specialist Paul Raison, setting an auction record for the artist in any medium.

#AuctionUpdate ‘The Holy Family’ by Gerard David soars above the estimate, achieving £4,846,250, setting a new #WorldAuctionRecord for the artist at auction. pic.twitter.com/9lkwfc4212

The top lot of the night was a portrait of Carlo Alberto Rati Opizzoni by Ludovico Carracci (1555-1619), showing the high-ranking Italian nobleman in armour wearing the Order of the Knights of Malta and the city of Bologna visible in the background beyond.

Christie’s described the work as “full of command and charisma” and “one of the artist’s outstanding achievements in portraiture”.

Estimated at £3.5m-5m, the opil on canvas was pursued by three bidders and was knocked down on the phone at £4.3m to a buyer operating through Christie’s specialist John Stainton.

The price was the second highest price at auction for the artist and made a healthy return for the vendor who had purchased it at Sotheby’s New York, in January 2005 for $1.81m (£961,700) including premium.

Among the casualties was a Rubens portrait deaccessioned by the Metropolitan Museum of Art because it was believed to be a copy.

The small portrait of the artist’s daughter Clara Serena was ascribed to a follower of Rubens at the time the New York museum sold the work at a Sotheby’s New York auction in January 2013. Back then, it was estimated at a modest $20,000-30,000 and sold to Christie’s vendor, reportedly a British collector, for £457,500 including premium.

After its attribution was upgraded to an autograph work by Rubens, it was estimated here at £3m-5m but seemingly attracted no bid on the night and was left unsold

Immediately prior to the Old Master sale, Christie’s Exceptional sale included two bronzes from the court of Louis XIV.

One was a cast of Ferdinando Tacca's Hercules and Achelous from c.1640-50 which had an ‘estimate on request’ of around £5m. Measuring 58cm high and documented as a gift from Louis XIV to his son, the Grand Dauphin, it had been acquired by the vendor for $1.8m at Sotheby’s New York in 1994. The subject depicts Hercules in a ferocious battle against the god Acheloüs who has transformed into a bull. 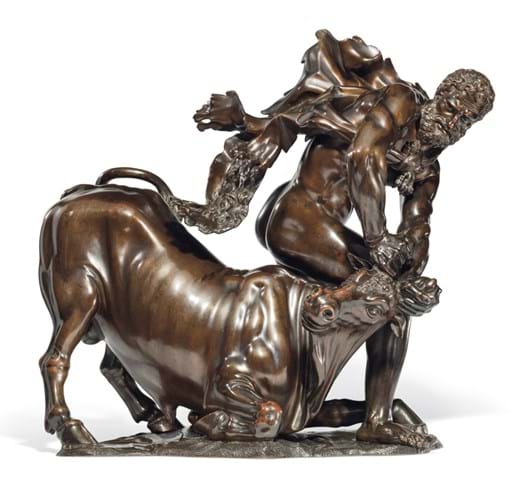 The other prime offering was a c.1690 reduction of the original François Girardon (1628-1715) model of the Sun King on horseback that stood in the Place Louis-le-Grand. It was purchased by the vendor at an auction in Toronto in c.1993 when it was thought to be a 19th century copy.

Now believed to be the lost sculpture from the artist’s own collection and standing just over 1m high, it failed to sell against what proved to be an ambitious £7m-10m estimate.