ATG’s selection of hammer highlights this week includes a rare Roman-Jewish bronze ring that made over 30-times estimate. This Roman bronze ring offered for sale by Pax Romana in London appears to shed light on a little known aspect of the imperial army – the contribution of Jewish soldiers.

To the bezel is the Star of David while the shoulders are inscribed Ves-Pas (for the emperor Vespasian who ruled from 69-79AD) and Legio VII (Seventh Legion).

Evidence suggests that Jews served in the imperial army from the beginning of the Pax Romana under Augustus (27BC-14AD) to the ascent of Christianity in the 5th century.

The First Jewish Revolt (66-70) itself – including the Roman army’s capture of Jerusalem and the destruction of the Temple in 70AD – was thwarted with the aid of Tiberius Julius Alexander, an Alexandrian Jew who, as Prefect of Egypt, employed his legions in Judea. Many other Jews were hired as foot soldiers, leaving inscriptions or symbols on their tombstones and sarcophagi.

This ring, described by the auctioneers as unique, came for sale from a private collection in London that had been formed in the 1970s on the UK and European art market. It was estimated at just £500-700 at the sale on November 24 but found plenty of admirers before the gavel fell at £22,000. Although badly damaged – a section of the rim was broken and restock and a crack circled the body – this 9in (23cm) Qing turquoise-glazed vase sold for an unexpected £7300 (estimate £50-100) at Peter Wilson in Nantwich on November 20.

The key to its appeal was a six-character Qianlong (1735-96) seal mark that bidders believed to be of the period. ‘Self-Portrait in a Flat Cap and Embroidered Dress’, an etching by Rembrandt van Rijn – £13,000 at Forum Auctions.

The sale at Forum Auctions in London on November 21 included a group of etchings by Rembrandt van Rijn (1606-1669) entered for sale by a Gloucestershire lady. This 3.75 x 3in (9.5 x 7cm) print known as Self-Portrait in a Flat Cap and Embroidered Dress is a ‘good and even’ impression of either the first or possibly second state of three known versions c.1642.

The platemark is possibly slightly trimmed and there are some signs of a small repair to the upper left corner. In his book English Clocks for the Chinese Markets (1212), Ian White describes the emperor Qianlong (1735-95) as “simply the greatest collector of Western clockwork there has ever been”.

Many of the magnificent clocks made by English clockmakers that entered the Imperial collection (there were estimated to be more than 4000 of them) were later copied in the Guangzhou workshops.

This Chinese ormolu and paste-set mantel clock offered by Bellmans of Wisborough Green, Sussex on November 16 is typical. The 15in (37cm) 'scroll angle' case embellished with brightly coloured enamels and paste gems is a type often used by London makers Henry Borrell and John Mottram in the 1780s. 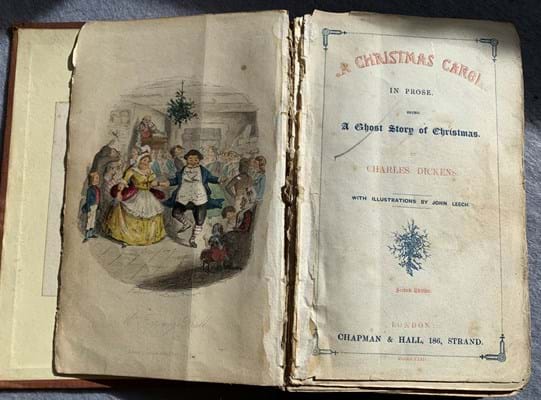 Although Charles Dickens is often credited with inventing the modern idea of Christmas, some of the credit should go to John Leech. It was the Punch illustrator who provided the illustrations to the early printings of A Christmas Carol, Being A Ghost Story of Christmas.

The hand-coloured steel-engraved plates depicting Mr Fezzywig's Ball, Marley's Ghost, Scrooge's Third Visitor and The Last of The Spirits were all Leech’s genius.

First edition copies of A Christmas Carol, those printed by Chapman & Hall and dated 1843 to the red and blue title page, are scarce so it was remarkable that several turned up for sale together at CW Harrison & Son in Ossett in West Yorkshire on November 25.

They were part of a cache of 11 Chapman & Hall printings of the Dickens classic (all from the 1840s but in generally poor condition) that came for sale from a local gentleman. He had carefully stored them for a number of years in his garage after inheriting them from a friend who had told him they had significant value. Few could remember seeing so many early printings together in a single sale.

They were correctly catalogued but given expectations of under £50 each on account of missing plates or detached pages and boards. But all did rather better than expected.

Three copies were sold to internet bidders for more than £1000 including two versions of the 1843 printing with the four plates and brown and gilt cloth boards detached but present that took £1300 each.