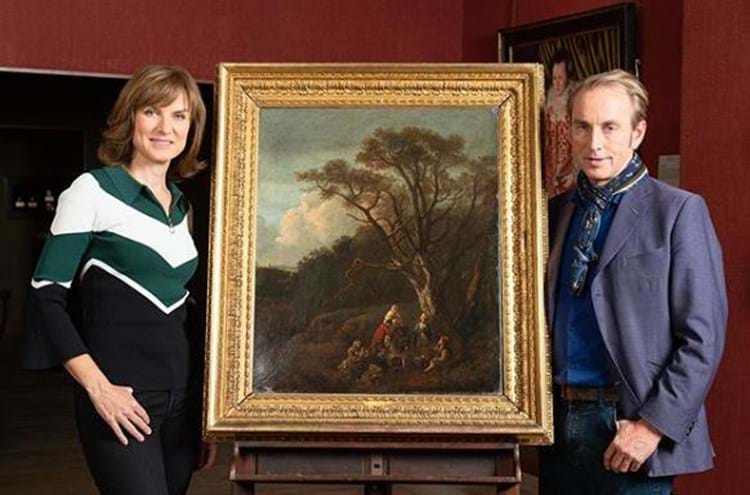 In the first episode of the new series of Fake or Fortune? this pastoral scene once thought to be by Thomas Gainsborough is investigated by presenters Fiona Bruce and Philip Mould. Image credit: Philip Mould & Company/ BBC.

Art dealer Philip Mould, presenter Fiona Bruce and the Fake or Fortune? team investigated the identity of the painter of an 18th century landscape owned by Mark Cropper’s family for generations. Until the 1970s it was considered to be a Gainsborough. However, a valuation downgraded it to a Thomas Barker of Bath (1769-1847) – a mimic of Gainsborough. Cropper said his father tore off the Gainsborough label in disgust.

After extensive research by the Fake or Fortune? team and Aviva Burnstock, head of conservation and technology at The Courtauld Institute of Art, it was discovered that another painting was under the work. The artist of the landscape had reused the canvas.

The work underneath, a portrait of a woman, was attributed by Mould as by the early 18th century painter Michael Dahl (1659-1743). An x-ray of the landscape revelaed this portrait of a woman, attributed as by the early 18th century painter Michael Dahl (1659-1743). Image credit: BBC.

This put the Gainsborough attribution in question but after further research Mould said during the programme: “We have established that Gainsborough sometimes reused other people’s paintings and all the pigments are 18th century.”

But despite being owned for more than 100 years as a Gainsborough and many clues leading to the possibility it might be by the famous artist, when expert Hugh Belsey examined the picture and the accompanying research he did not believe it to be correct.

He said: “Taking into account all the research I believe it is not by Gainsborough but by Barker of Bath. It lacks the subtlety of Gainsborough, it is too tentative, too reserved.”

Sadly for Cropper the Dahl painting underneath the landscape is actually worth more than the Barker of Bath effort. Mould valued it at £6000-8000.

Cropper said: “I am gutted. I really wanted to stick the Gainsborough name back on it. But that’s not going to happen now. If I am being very philosophical, actually what you have revealed is an amazing story here. It is still an object of some value but not of monetary value.”