This Scottish silver-mounted snuff mull sold for £2800 at Mellors & Kirk was given by the Jacobite Lord Balmerino to the captain of the guard at his execution on Tower Hill in 1746.

Jacobite rebel and his cry of defiance Inscription on the silver-mounted snuff mull sold for £2800 at Mellors & Kirk which was given by the Jacobite Lord Balmerino to the captain of the guard at his execution on Tower Hill in 1746.

What the Mellors & Kirk saleroom described as “a remarkable, if macabre memento, of one of the most fervent leaders of the Jacobite Rising of 1745” sold for a hammer price of £2800 at the Nottingham auction on June 26. The Scottish silver-mounted snuff mull made c.1740 was estimated at £400-600.

It was inscribed as belonging to Lord Balmerino, who was beheaded on Tower Hill in 1746 after being captured on the battlefield of Culloden when the rising was defeated. The 9.5cm high mull’s inscription includes Given by him on the scaffold to the officer on guard/If Lost to be Returned to Mr Josh. Knowles No 2 New Inn London.

Arthur Elphinstone, 6th Lord Balmerino (1688-1746), resigned his commission following the accession of the Hanoverian George I in 1714. Having taken part in the Jacobite rising of the Old Pretender in 1715 and making good his escape after it was put down, he joined the French army, not returning to Scotland until 1744 to join forces with Prince Charles Edward Stuart, the Young Pretender.

On the day of his execution, immediately before he was beheaded, when he presented this mull to the captain of the guard, he delivered a resounding, unrepentant cri de coeur, uttering: “If I had a thousand lives, I would lay them all down in the same cause.” Sikh plaque carried into battle during the Burma campaigns of the Second World War, sold for £20,000 at Roseberys.

A Sikh plaque carried into battle during the Burma Campaign in the Second World War was one of the stars of Roseberys London’s inaugural Arts of India sale.

It featured a group of portraits on ivory of the 10 Sikh Gurus and the Guru Granth Sahib – the principal scripture of Sikhism compiled by the gurus and regarded by Sikhs as the final, sovereign, and eternal living guru. The plaque had passed by descent from Captain Eric Richards, who served as a captain in the 11th Sikh Regiment in the Burma campaigns.

Richards, who learned the Sikh traditions and language, described and considered the Sikh soldiers as his brothers. Indeed, his life was saved in action against the Japanese by his Sikh bodyguard. Richards also served alongside Nand Singh, a famous Sikh soldier in the war who was awarded the Victoria Cross.

Roseberys said that such plaques played a central role in the life of a Sikh soldier in the British Army. The symbols of faith accompanied the regiments abroad, in adverse conditions and on the front line. The George Medal, like the more prestigious George Cross, is usually awarded to civilians for acts of bravery although it is also given to service personnel. Of around 2000 medals awarded 27 second award bars have been issued (ie for winning it twice).

Flight Lt George Henderson (1921-63) was one of those double winners but sadly lost his life as a result of his bravery. His GM and bar plus his Second World War medals and assorted ephemera were consigned by family to the June 19 auction at West Sussex saleroom Burstow & Hewett, estimated at £10,000-15,000. They sold for a hammer price of £16,000.

He won the GMs when Assistant High Commissioner for Aden. In February 1956 Henderson was returning to his headquarters in Nisab, accompanied by a tribal guard and driver, when the car was ambushed by a group of tribesmen. The three men ran to cover in a ditch and returned fire. With a wounded foot and little ammunition, Henderson charged alone up a hillside at a group of 10 tribesmen and they fled, saving his companions' lives as well as his own.

Seven years later, Henderson, the British High Commissioner of Aden (Sir Kennedy Trevaskis), officials, Arab rulers, and politicians arrived at RAF Khormaksar, Aden, to fly to London for talks. As passengers were boarding the aircraft, a hand grenade was thrown from a balcony by a member of the National Liberation Front. Henderson pushed Trevaskis out of the way and threw himself in front of the grenade. One woman was killed and 41 others injured.

Henderson died of his wounds several days later. He was informed of his second GM award before his death. 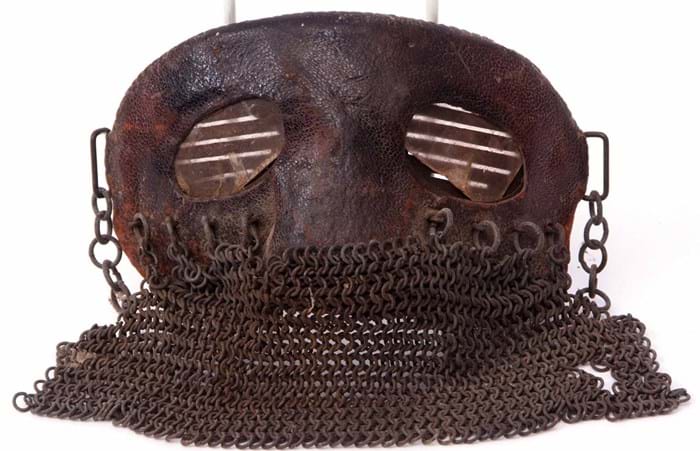 The First World War threw up all kinds of technical innovations as modern conflict demanded new ways to win. On the battlefield the tank was one such would-be breakthrough.

But new methods involved trial and error – when it came to tanks it was realised that the impact of bullets hitting the outer steel of the tank's body would cause slivers of hot steel, flying metal splinters, which were dangerous to the face and eyes in particular.

A rudimentary form of protection resulted: the splatter mask. Examples come to auction from time to time with this one shown above estimated at £300-350 in the Keys June 25 sale in Aylsham near Norwich. It sold for £620.

The British mask had a kidney-shaped and leather-covered front with cut diagonal eye slots and was fitted with a chain mail veil with padded chamois leather lining and hinged strap holders. An unusual selection of medals proved very appealing to collectors as a group of seven sold for a top-estimate £4500 at Suffolk saleroom Lacy Scott & Knight on June 14.

Awarded to Petty Officer Arthur Henry Craven, it included a China War Medal (1900) with Relief of Pekin clasp, relating to service in the Boxer Rebellion. This is a very desirable medal although those with a Defence of Legation clasps are the most in demand for this honour.

Craven was also involved in the 1915 Gallipoli campaign, however. In May 1915 he was serving aboard the trawler Lord Wimborne which was involved in minesweeping and the landing of Australian troops on the beaches. He was awarded the Distinguished Service Medal for his actions on April 25, landing troops and ammunition at Gabe Tepe under heavy fire in which approximately 600 soldiers lost their lives.

After having off-loaded wounded Australian troops to the battleship HMS Triumph, the trwaler returned to the beach and was in close attendance when Triumph was attacked and damaged by German torpedoes - according to Craven the ship went down in seven minutes. During the attempted rescue of the men and crew, Craven jumped into the water and in 30 minutes managed to save about 20 lives.

It was for these deeds he was awarded the Royal Humane Society medal (first instituted by the society back in 1774. From 1837 a distinction was made between ‘successful’ and ‘unsuccessful’ rescues with different medals given as appropriate).