ATG’s selection of hammer highlights this week includes an oak chair from the collection of Dame Elisabeth Frink that made over 12-times estimate. A sale held by Sean Eacrett Auctions in Griesemount House, Ballitore in Co Kildare on November 19 included three sketch books by Sophia Charlotte Haldimand (nee Prinsep). Together they comprised more than 120 competent pen and wash and occasionally watercolour sketches depicting scenes in Surrey, from the Grand Tour in Europe and others from India.

Most were annotated or titled with extensive inscriptions while one of the albums was inscribed Volume 1 of Sketches by SCH in 1818, given to ER Prinsep in 1852.

The scenes of Calcutta in the late 18th century point to Charlotte Prinsep’s place of birth.

She was the eldest child of Sophia Elizabeth Auriol (1760-1850) and John Prinsep (1746-1831), a principal in the London East Indian shipping agency of Prinsep, Saunders & Co who made his fortune trading in textiles and indigo dye.

A number of her siblings shared her passion for art, among them James, an antiquarian and amateur painter, Augustus and Amelia Rebecca, both keen watercolourists as well as Henry Thoby who with his wife Sara frequently entertained such figures as Thackeray, Tennyson, Burne-Jones and George Frederick Watts.

In 1807 Sophia Prinsep married George Haldimand (1781-1851), a patron and collector of art and part of the syndicate of property developers and financiers that built Belgrave Square. The Haldimand family lived at number 31 Belgrave Square where Sophia had a rosewood table with an integral drawer for her albums and a rising top for examination. 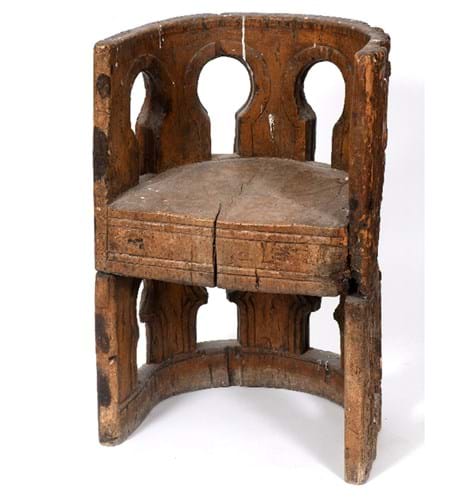 A Gothic style oak dugout chair from the collection of Dame Elisabeth Frink – £3800 at Charterhouse.

Items from the estate of the late Dame Elisabeth Frink (1930-93) were included in the Charterhouse sale in Sherborne, Dorset on November 14-15. The items, all in barn storage for several years, came via her son from her marriage to first husband Michel Jammet.

“It is quite an eclectic selection, as you would expect from a family of artists,” commented auctioneer Richard Bromell.

This (probably 19th century) Gothic style oak dugout chair, in two parts, was among the most eagerly contested lots, selling to an online bidder at £3800 against a £200-300 estimate. 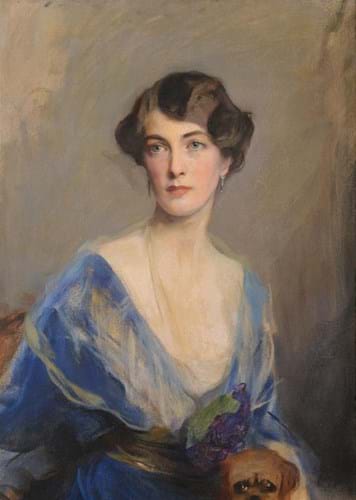 It came for sale at Tennants of Leyburn on November 16 by descent from the sitter, a landowner in East Yorkshire, patron of the Arts and Crafts movement and a notable beauty of the time.

After marriage to the elderly businessman Sir Max Leonard Waechter (1837-1924), she took the name Waechter de Grimston after inheriting the Grimston Garth estates in 1927. The painting, of a similar date, had once been a little longer than its current 84cm but Lady de Grimston had objected the way in which de László had painted her hands, so had the canvas cut to exclude them. It is likely that the artist’s signature was cut away during this process.

The picture, sold to an online bidder for £18,000 (estimate £6000-8000), will be included in the forthcoming catalogue raisonné of portraits by the artist currently being compiled by the Hon. Mrs de László. 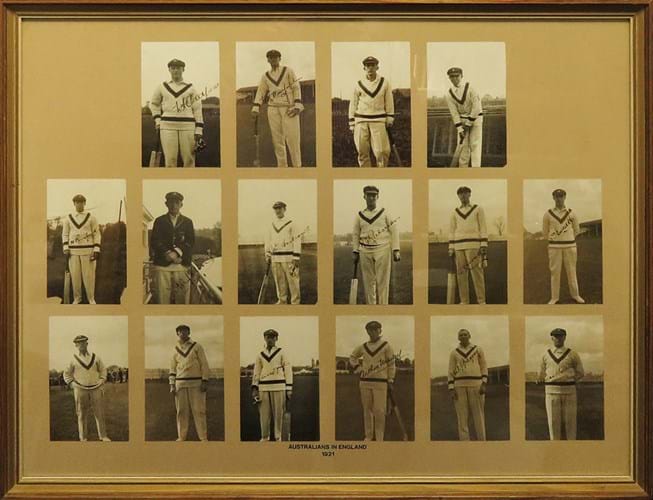 A group of autographed photographs of Australian cricketers from the 1920s – £3200 at Lockdales.

This recently-framed group of postcard-sized autographed photographs, offered for sale at Lockdales in Ipswich on November 16, is titled Australians in England 1921. Many famous baggy greens from the inter-war era are pictured but it appears that the personnel are more probably a later Australian XI – perhaps that from the 1924-25 series held in Australia or the 1926 touring side.

Included among the 16 players, most of which appear to have signed their photos, are the great opening batsman William ‘Bill’ Ponsford (1900-1991) who broke into international cricket in the 1924-25 season, and future captain Victor York Richardson (1894-1969) who played 19 times for Australia between 1924-36. One player here who did compete in both the 1921 and the 1924 sides was the fearsome right-arm fast bowler Jack Gregory. Although catalogued as 18th century, this small blue-green glass wine bottle shares much in common with the so-called ‘shaft and globe’ bottles produced in England and Holland in the 1660 and 70s.

This example, of attractive ‘quarter-size’ at 6in (15cm) high, blue-green tint and a wide string rim to the neck, emerged for sale at Vendu Rotterdam on November 12.