Colnaghi, which runs galleries in London and New York, has opened an exhibition at a 9th century Benedictine Abbey called Abbazia di San Gregorio in Venice. Colnaghi and interior designer Chahan Minassian have decorated a refurnbished abbey in Venice as the home of a “21st-century traveller” or modern-day Grand Tourist.

The abbey on the Grand Canal near Santa Maria della Salute was restored in the early 20th century and includes architectural and decorative features spanning more than 1000 years.

Colnaghi and interior designer Chahan Minassian have decorated the abbey as the home of a '21st-century traveller' or modern-day Grand Tourist. The décor will incorporate Old Master paintings, vintage and modern furniture and design.

The exhibition opened this month to coincide with La Biennale di Venezia and will remain open by appointment until November 24. Colnaghi will host an exhibition in Venice that will open by appointment until November 24.

In a statement Colnaghi said: “Venice has been a central destination for ‘Grand Tourists’ since the 18th century and its appeal has continued to this day… As well as illustrating the lifestyle of a modern-day collector, the exhibition at the Abbazia di San Gregorio will encapsulate the timeless spirit of the Grand Tourist in a contemporary setting.

“Set amid its medieval architecture… the installation will include works of art spanning the centuries, from master paintings to contemporary design, illustrating how today’s collectors can live alongside their collection.”

A website launched by the Colnaghi Foundation “explores Venice through notable people, places and sights, and includes itineraries drawn from the diaries of notable visitors over the last 300 years”.

Over the years the abbey has hosted a number of prominent artists including Canaletto (1697-1768), who painted from the site, John Ruskin, who studied its architecture in the 19th century, and Andy Warhol, whose work was exhibited there in 1988. It was also once owned by Woolworth heiress Barbara Hutton. 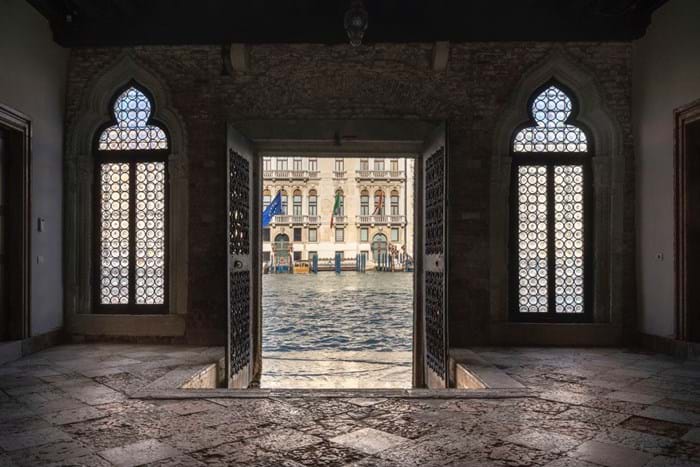 A view from the entrance of the Abbazia di San Gregorio in Venice.