A three-in-one opportunity to purchase rare early works by Paul Gauguin (1848-1903) comes up in Paris this month. The 1881 view of Pissarro’s garden at Pontoise by Paul Gauguin to be offered for sale by Sotheby’s Paris on March 29.

A highlight of Sotheby’s March 29 sale of Impressionist and Modern painting in the French capital is a hitherto unpublished oil on canvas by Gauguin that has remained in the same family since the 1920s.

The 2ft 1in x 21in (64 x 54cm) oil on canvas titled Le Jardin de Pissarro, Quai du Pothuis à Pontoise is signed and dated p Gauguin ’81, making it a rare to market example of a work from early in his career.

Gauguin was befriended in 1879 by the Impressionist Camille Pissarro who helped launch his career and taught him painting techniques. Gauguin often visited the older artist at his home in Pontoise where this view of the garden was painted.

Interestingly it is also almost certain that the figure to the foreground is Pissarro himself as he was known to often work under an umbrella. 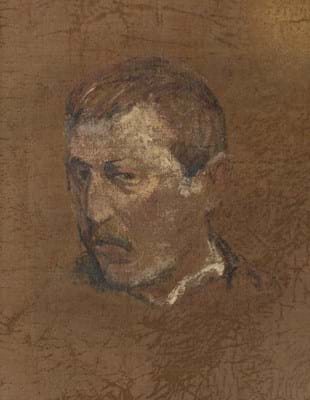 As well as the main view, the reverse of the canvas features two Gauguin self-portraits.

They are thought to have been executed after the garden scene but are nonetheless reckoned to be the earliest Gauguin self-portraits, painted in advance of some of his most famous examples from a few years later.

Filiger is the solo choice