A dressing gown worn by Queen Victoria’s husband Prince Albert (1819-61) has been bought by the Historic Royal Palaces and will go on display at Kensington Palace.

The robe with flori-bunda rose design in golds and dusky pinks was bought by Historic Royal Palaces on August 12. Image credit Hansons.

The full-length, hand-sewn floral dressing robe with a crown mark inside the collar dates to c.1850s and had been stored in a wardrobe for 150 years.

Eleri Lynn, collections curator at Historic Royal Palaces, said: “Surviving examples of Prince Albert’s clothing are exceptionally rare, and this is the first acquisition by Historic Royal Palaces of an item from his wardrobe. It fills an important gap in the Royal Ceremonial Dress Collection – an internationally important collection of over 10,000 items of royal and court dress.”

Lynn said the robe will go on display at Kensington Palace to “help us tell the story of Prince Albert’s life with Queen Victoria in the very place they first met.” 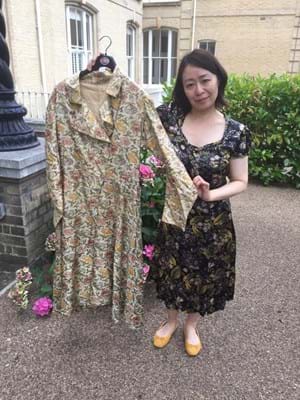 It was given to Rudolph Löhlein, valet to the prince and personal attendant to Victoria.

The anonymous Surrey vendor said: “Rudolph Löhlein was my great-great grandfather. He became the Prince Consort’s second valet in 1847 and then principal valet in 1858. They knew each other as children. He was at Prince Albert’s death bed when he died in 1861. My father used to say Albert died in his arms.

“The dressing robe is beautifully made. I inherited it from my mother. It’s been carefully preserved for many years, wrapped up and put away in a wardrobe.”

Hansons said the queen retained Löhlein as personal attendant and groom of the chambers. He retired in 1884 with a generous royal pension. When he died at the age of 68 in 1896 Queen Victoria sent a letter of condolence, wreath and representative to his funeral. He is buried in St Mark’s Church Yard, Surbiton, London.

The right robe for an artistic rebel