Dominic Winter in South Cerney, Cirencester is anticipating a bidding battle next week for a finely modelled Hellenistic white marble figure of Aphrodite. Standing 21in (53cm) high, the three-quarter length goddess from the 2nd century BC is depicted in the pose made famous by the Louvre’s near contemporary Venus de Milo. She stands with her weight on the right leg, the left arm formerly raised and her head turned slightly to the right.

The Venus de Milo (now thought to be the work of the Hellenistic sculptor Alexandros of Antioch) is itself deemed to be a copy of an earlier lost model by the classical Greek sculptor Lysippus. 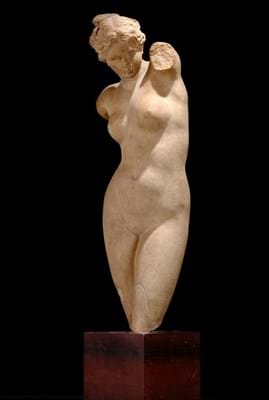 The Gloucestershire discovery, in relatively good condition apart from its obvious defects and repairs, comes for sale by descent from the collection of Mark Oliver (1899-1987) of Edgerston, Roxburghshire.

He was co-owner with Richard ‘Ted’ Wilson of the Savile Gallery on Bruton Street during the 1920s, which specialised in Old Master paintings and drawings and also showed work by Walter Sickert (1860-1942), who gave Oliver some tutoring in painting.

The current owner recalls showing the marble to school friends in the family home in the 1960s while a probate inventory taken by an Edinburgh firm of solicitors in 1989 lists it as ‘Greek Sculpture: Aphrodite’ alongside a valuation of £3500.