Sotheby’s set the third-highest price for a work by David Hockney (b.1937) in London last night. The Splash was knocked down at £21m against an estimate of £20m-30m. It was guaranteed by a third party, meaning it was always bound to sell on the night.
The price demonstrated the major growth in the artist’s market since the picture sold in the same saleroom in 2006 when it made £2.9m including premium – a record for the artist at the time.

Nine of the top 10 prices for Hockney have been set in the past two years with the record now standing at $80m (£61.6m) hammer – the sum fetched by Artist (Pool with Two Figures) which sold at Christie's in New York in November 2018 and remains the most expensive painting by a living artist sold at auction.

His double portrait of Henry Geldzahler and Christopher Scott made the highest price for a Hockney sold in London when it sold for £33m at Christie’s in March last year. 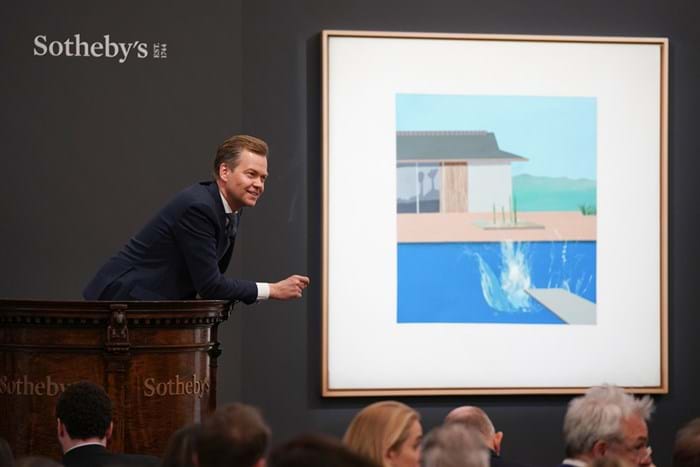 The work was one of a series of three ‘splashes’ by the artist. The auction house had estimated it at £20-30m and arranged a third-party guarantee.

The Splash dates from 1966 and was the second in a series of three ‘splashes’ and stands in the middle of the group in terms of size. The largest and final work of the series, A Bigger Splash, is now in the Tate collection in London, while the smallest, A Little Splash, remains in a private collection and has never been offered publicly.

The sun-drenched swimming pool is a defining image in Hockney’s art and this work dates from a relatively early period after he first visited the west coast of the US during the summer of 1964, which marked a transformation in his work.
With his style becoming brighter and bolder, Hockney decided to relocate more permanently to California and took up a studio near the junction of Pico and Crenshaw Boulevards in Los Angeles in 1966.

In reference to A Bigger Splash, Hockney explained in an exhibition catalogue: “The splash itself is painted with small brushes and little lines; it took me about two weeks to paint the splash. I loved the idea, first of all, of painting like Leonardo, all his studies of water, swirling things. And I loved the idea of painting this thing that lasts for two seconds; it takes me two weeks to paint this event that lasts for two seconds.

“Everyone knows a splash can’t be frozen in time, so when you see it like that in a painting it’s even more striking than in a photograph.”

Sotheby’s European head of Contemporary art Alex Branczik said: “The star lot of our evening sale needs little introduction, having received plenty of interest from collectors, the media, and art enthusiasts across the globe in the lead-up this evening’s auction. That’s what is really special about David Hockney – born in Yorkshire, the artist and his work are now truly universal.”