A selection of football memorabilia coming up at auction or sold recently – plus a Sir Stanley Matthews tea set from a dealer. An England international football cap awarded to Sir Alfred (Alf) Ramsey is estimated at £2000-3000 in the Lacy Scott & Knight auction in Bury St Edmunds on September 10.

After his ending his career in football in 1979-80 he retired to Ipswich with his wife Lady Victoria Ramsey. This cap was acquired directly from Lady Ramsey by the current vendor while working as a painter and decorator at her home (a letter to support this signed by Lady Ramsey and dated 30/09/2011 accompanies this lot). The shirt sold to a buyer in California for a hammer price of £8800, just below estimate. 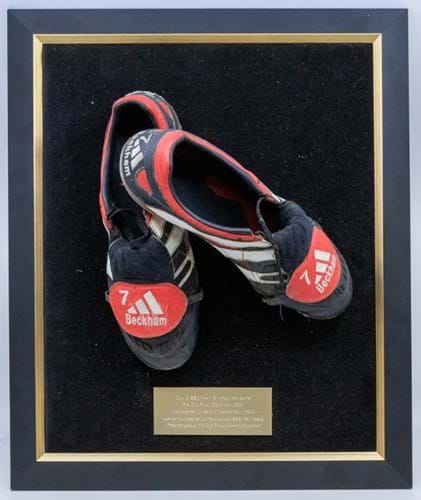 Staying on home soil are boots worn by Beckham when he played for Manchester United in the 1999 FA Cup final against Newcastle United.

The Red Devils won the game 2-0, their 10th FA Cup win in the memorable 1989-99 Treble season. The size 8 ¾ boots, created to Beckham’s unique specification, sold within estimate to a private UK phone bidder for £10,500. More Beckham memorabilia, a red Manchester United shirt worn in a UEFA Champions League Group Stage match against Greek side Panathinaikos on November 21, 2000, sold on low estimate to a bidder in Hong Kong for £4000. The framed shirt was signed Best wishes David Beckham 7.

The items came to auction from a private Shropshire collector. Trevor Cherry’s football shirt believed to be from the 1975 Leeds Utd v Derby County match which featured ‘the greatest fight in English football’ – £2800 at Hansons on August 24.

Meanwhile, in that same sale a football shirt believed to be from a 1970s game which featured ‘the greatest fight in English football’ took £2800 against an estimate of £700-1000.

The yellow jersey belonged to Leeds United player Trevor Cherry. He scored in the match that took place on November 1, 1975, which Derby County won 3-2. But the game is better known for the feisty punch-up between the Rams’ Franny Lee and Leeds defender Norman Hunter.

It had been consigned by Notty Hornblower, a lifelong Derby supporter and owner of Hope House Costume Museum in the Peak District village of Alstonefield – and Hansons’ vintage clothing consultant.

She said: “I won the shirt in a raffle at a sports club event in the 70s, possibly a DCFC supporters’ club night. I remember being told it belonged to Trevor Cherry and had come from that famous game in 1975.”

Cherry, who died last year, captained Leeds and played for them for 10 years from 1972. Hunter also passed away in 2020 – one of several members of that great 1970s team who have died recently, including Jack Charlton, Terry Cooper, Peter Lorimer and Mick Bates.

Meanwhile, a silver tea service presented to Sir Stanley Matthews to mark his record cap has been sold by a Hampshire dealer.

Sir Stanley made his 44th international appearance in the 2-0 win against Belgium in January 1946. He was presented with the service by Stoke City shortly before he moved to Blackpool after what the press described as a ‘bust-up’ with manager Bob McGory.

The outside right would later return to Stoke where he played in the top flight until he was 50.

The items were offered by Charles Wallrock of Lymington-based Wick Antiques on the 2Covet antique portal, of which he is a director, going on sale for around £20,000, after he had owned them for some years. They have now gone to a private buyer.

The service, which was made by Pidduck & Sons of Sheffield in 1932, consists of a teapot, hot water jug, sugar bowl and milk jug. Each piece is monogrammed SM. The teapot is also inscribed with the words: Presented by Stoke City Football Club to their player S Matthews in recognition of his creating a record of 44 appearances for England which he established when playing against Belgium on January 19th 1946.

Wallrock’s fellow 2Covet director Steve Sly, who was previously co-owner and vice chairman of AFC Bournemouth, said: “He is the only footballer ever to be knighted while still playing, and his list of achievements is as long as his playing career and includes being the first person to win the Ballon d’Or.

“It is fitting that he was presented with a tea service because the only time he drank alcohol was when he supped some champagne straight from the FA Cup after winning it in 1953 – the famous ‘Matthews Final’.”