ATG’s weekly selection of items that caught bidders’ eyes includes the original foyer doors from the Abbey Road recording studios that tripled their estimate in Surrey. Foyer doors from the Abbey Road recording studios – £14,000 at Ewbank’s.

Ewbank’s in Send, Surrey offered the original foyer doors from the Abbey Road recording studios as part of an Entertainment, Memorabilia & Movie Props auction on February 25.

The doors, through which The Beatles would have passed to record around 90% of their material between 1962-70, were a fixture from 1931-88. Removed as part of a refurbishment, they were acquired by an EMI executive and have remained in private ownership since.

Recording engineer and studio manager Ken Townsend, who worked at Abbey Road from 1950-95, has provided a letter of authenticity. The doors were estimated at £2000-4000 but did rather better, selling at £14,000. Dials, bezels, hands and crowns were often replaced during Rolex servicing. So, there is a premium to be paid for watches that escaped regular episodes of restoration and replacement. The watch in good original condition is the rarity.

The sale at Sterling Vault in Farnham, Surrey on February 25 included a version of the uber-collectable Rolex military issue Submariner or Milisub. Rolex supplied reference 5513 watches for British special forces throughout the 1970s, although over the course of the decade this numbered as few as 1200 units.

Of these only a third are thought to have survived in original condition retaining ‘sword’ hands’ and what was a new style bezel calibrated to 0-60. The letter T within a circle to the dial denotes the presence of titanium.

The example here, made c.1974 with the MOD number, military broad arrow and a 1974 issue date to the case back, was considered ‘exceptionally good’ with all elements deemed original. It was sold with a Rolex service guarantee dated June 2008 and is accompanied by purchase receipt dated 2008 from a well-regarded London showroom. This plywood Short Chair was designed by Marcel Breuer for the pioneering London firm Isokon where the Hungarian worked alongside former Bauhaus colleague Walter Gropius after they fled Germany.

Production of the chair began in 1936 and continued until 1939 when the UK’s stock of plywood was requisitioned for the war effort and the Isokon factory closed.

Production resumed in 1963 and continues today making the chair offered at Dawson’s in Maidenhead on February 25 difficult to date. After it sold to a private bidder at £7600, many times the £400-600 estimate, auctioneer Harrison Goldman concluded the chair was pre-War.

The chair was given its name because it was a 3ft 4in (1.02m) adaptation of Breuer’s more numerous laminated and solid birch Long Chair, an example of which from the same Hampstead house was also offered at Maidenhead. The 4ft 9in (1.46m) long chair, again pre-War, sold to the UK trade at £3600. The sale of Rare Books, Manuscripts, Maps & Photographs at Lyon & Turnbull in Edinburgh on February 24-25 included a deed box containing a large quantity of 18th and 19th century correspondence sent to Robert Scott (1777-1884) and his company Robert Scott, Fairlie and Company.

The firm was a conduit between the East India Company and locals in India and had dealings with plantation owners in other parts of the empire. Estimated at £3000-4000, it took £16,000.

In his work, The Scottish Connection with India 1725-1833, George McGilvary succinctly describes the role of such organisations: “Without Scottish ‘houses of agency’ acting as middle-men and purveyors of capital for indigo plantations and production in Bengal, for salt farms and saltpetre, and most of all for opium and cotton, the East India Company would not have fulfilled its primary commercial function or been able to remit moneys to London.”

Correspondence in the collection, that varied from business and politics to family matters, offer a valuable insight into British colonial attitudes and opinions at the time.

A letter dated April 10, 1836 states: “We have of course no means of forming any opinion as to the present value of the Belvedere Plantation but have always considered it would be extremely advisable of the parties invested to dispose of the whole of their property in the Island should an eligible opportunity occur…”

An earlier letter from General Archibald Watson to Robert Scott, discussing life in India, writes about the Indian mutiny at Barrackpore in 1824, and his views on the future of the British Empire in India: “The effects of this severe example I fear will be rather sinister throughout the country... ...I do not think we shall ever lose our Eastern Empire – but I do not in the least doubt that it will fall to pieces...” 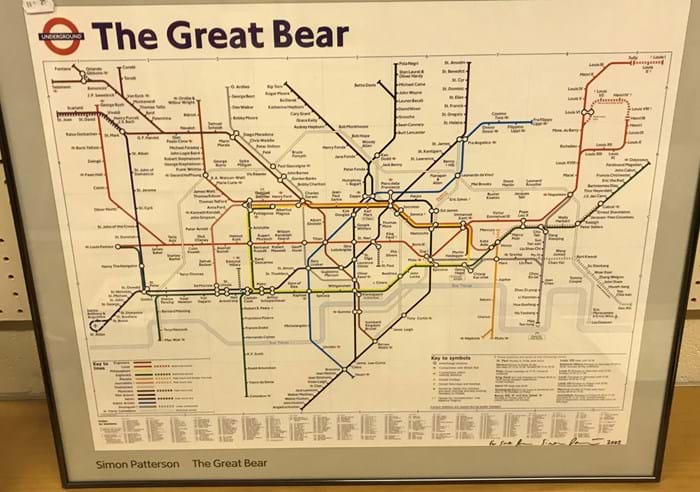 ‘The Great Bear’, a signed lithograph by Simon Patterson – £1950 at Moore Allen & Innocent.

The Great Bear lithograph is conceptual artist Simon Patterson’s (b.1967) personal take on the London Underground map of 1991. Each Tube line represents a category of ‘celebrity’ while Patterson replaced the names of the stations with the names of engineers, philosophers, explorers, planets, journalists, footballers, musicians, film actors, saints, Italian artists, sinologues (Chinese scholars), comedians and ‘Louis’ (French kings). The names on the map range from the obscure to well-known figures of popular culture

Patterson produced 50 limited edition prints in anodised aluminium frames, as regularly used by London Transport. This copy is inscribed to the lower right in black marker pen For Sue and dated 2002.