ATG’s weekly selection of items that caught bidders’ eyes includes a Georgian silver teapot with connections to the Wedgwood and Darwin families that sold four-times over estimate in Cumbria. A Georgian silver teapot with associations with the Wedgwood and Darwin families – £2000 at 1818 Auctioneers.

This silver teapot has London hallmarks for 1792 and a maker’s mark for silversmith Michael Plummer who worked out of Gutter Lane, London between 1791-95.

However, of equal importance is an inscription to the base dated July 1898 that states it belonged to Elizabeth ‘Bessie’ Allen, wife of Josiah Wedgwood II (the son of the English potter Josiah Wedgwood), and was later owned by their daughter Emma Wedgwood, who married her first cousin Charles Darwin. Their son Leonard Darwin appears to have commissioned the inscription. An inscription to teapot states it belonged to Josiah Wedgwood II and later owned his daughter Emma Wedgwood, who married Charles Darwin. 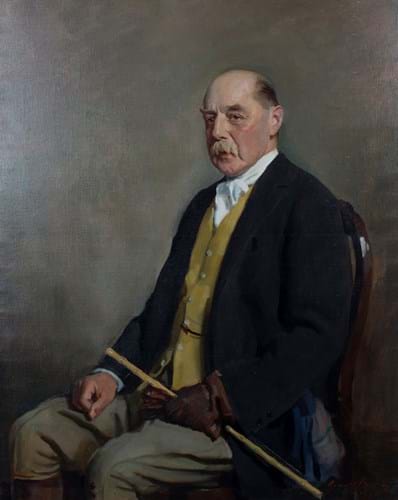 Sir Oswald Birley (1880-1952) was one of Britain’s most successful portrait painters of the inter-war era. Leading figures of the day – royalty, politicians, scientists and high society – went to him for the sort of well-painted likeness that was not going to frighten the horses.

Many remain with the families and institutions that commissioned them although a sign of growing commercial appreciation was the exhibition of 50 of Birley’s portraits held at the Philip Mould & Company gallery in 2017.

A chance to assess Birley’s auction market was provided by Toovey’s in Washington, West Sussex on February 3. Signed and dated 1930, this 1.25m x 1m oil on canvas in a Louis XIV style gilt composition frame depicted Sir Gordon Cunard Bt (1857-1933) – a member of the shipping dynasty. The Cunard baronetcy of Bush Hill in Middlesex had been created in 1859 for his great-grandfather Samuel Cunard (1787-1865).

Toovey’s guided this finely-executed portrait of an aging aristocrat in hunting garb at £400-600 but it found plenty of admirers willing to spend much more. The hammer price was £10,000. Most 18th and 19th century Scottish silver smithed away from the hallmarking centres of Edinburgh or Glasgow wasn't presented for assay. Instead, ‘provincial’ silver was typically marked with the maker’s initials and punches and symbols inspired by the town in which they traded.

It saved on the dangers of transport and, after 1784 when a duty was imposed on hallmarking, it saved on tax.

Collectors have long been fascinated by the multitude of Scottish provincial silver marks – some of them from towns and cities that supported only one or two silversmiths.

Close inspection of this outwardly ordinary set of six silver fiddle pattern tablespoons, offered by Nesbits in Portsmouth on February 3, reveal marks from Elgin. Each is marked CF Elgin and has a representation of the Moray town’s former cathedral and its patron saint St Giles. 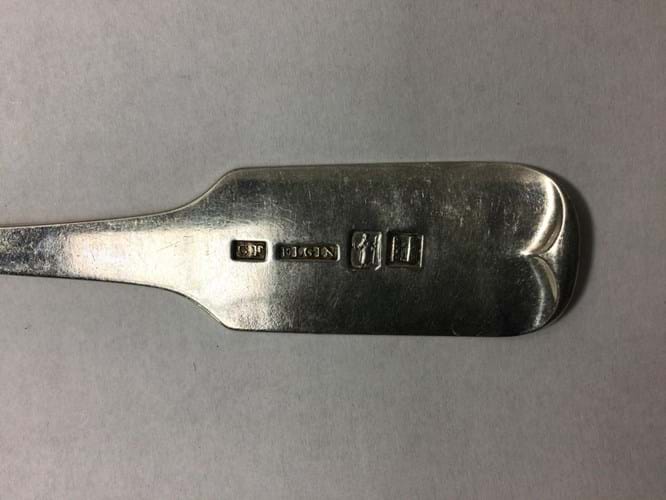 A detail of the Elgin marks to a set of tablespoons sold for £2600 at Nesbits.

All Elgin silver is rare and, as an added interest, Fowler usually marked his material simply ELN (rather than the town name spelled out in full). He did not always use both the St Giles and the cathedral wall mark. Such things matter.
The spoons made a 10-times top-estimate £2600 with a similar toddy ladle taking £560 from the same buyer. A first edition copy of ‘Rolle’s Abridgment’, 1668, together with contemporary ink annotations – £2400 at Forum Auctions

Sir Henry Rolle (1589-1656), a Civil War era West Country MP and Chief Justice who supported the Parliamentary cause, was the first lawyer to organise case law by subject.

In 1668, some 12 years after his death, his Abridgment des plusieurs Cases et Resolutions del Commun Ley written in Law French was published in two volumes. The preface to Rolle’s Abridgment, as it was better known, included an engraving of his portrait and an introduction by Sir Matthew Hale who described Rolle as "a person of great learning and experience in the common law, profound judgment, singular prudence, great moderation, justice, and integrity".

This first edition copy of Rolle’s Abridgment, offered for sale at Forum Auctions on February 4, gained much from a series of contemporary ink marginalia and notes made at end of each of the two volumes. These annotations penned by an early owner encouraged bids to £2400 – well above the £150-200 estimate or the sum a more pedestrian copy might bring. 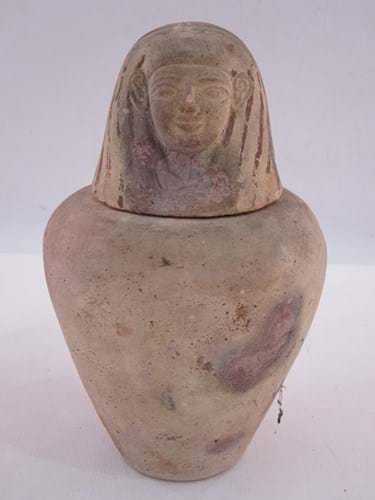 An Egyptian painted terracotta canopic jar from the collection of Lionel Walrond – £2400 at The Cotswold Auction Company.

The Cotswold Auction Company’s February 9 Books and Collectables auction in Cheltenham included a single-owner collection of antiquities from Lionel Walrond.

He was born in 1927 to tenant farmers, but on leaving school he eschewed a farming life for history and archaeology. This interest led to the discovery of three Roman mosaics in south Somerset before his 18th birthday.

He collected local and historical artefacts, setting up his own museum in a converted Second World War army Nissan hut. Walrond moved to Stroud in 1955 to take up the post as curator at the Lansdown Museum, a post which he held for 37 years.

Included in the auction of generally affordable antiquities was this 10in (25cm) Egyptian painted terracotta canopic jar with lid, representing one of the sons of Horus from the 1st millennium BC.

The label in Walrond’s hand reads 'Mummy Jar and Cover, dedicated to Maesthi (Man Headed God) son of Horus, held stomach and large intestines. Hieroglyphics erased either for reuse or by enemy that occupier may not go to heaven 9-3-48.’ Proving the most desirable of the 17 lots in the sale, it was estimated at £300-500 but sold for £2400.