For royal watchers in the saleroom, the latter part of 2021 promises to be quite a boon. Memorabilia and archive material with a close connection to royalty has emerged from two collections at upcoming sales. Both were compiled by figures with strong associations to senior members of the Royal family.

Gorringe’s of Lewes are offering an unpublished collection of letters, photographs and ephemera relating to the Queen and Prince Charles on December 7. It has been consigned by a direct descendant of Michael H Farebrother, a former officer in the Grenadier Guards who became a private tutor to The Prince of Wales in his early life.

The group includes a selection of manuscript letters from the Queen and the Prince of Wales relating to matters of both private and public life. Photographs and letters from the ‘Michael Farebrother collection of Papers Concerning H.M The Queen & Her Family’ will be offered at Gorringe’s with £50,000-80,000 estimate.

The West Sussex auction house described the collection as “a unique and historically significant album of candid correspondence”. It added that it provides “an intimate glimpse into day-to-day life in the Royal household in the early 1950s”.

Among the 11 letters from Princess Elizabeth, the future Queen, all addressed to Michael Farebrother, is one dated 30 July, 1947, where she expresses thanks for his letter of congratulations on her engagement: ‘It is so nice that one’s friends are thinking of one at such an important moment in one’s life, and I want you to know how very grateful I am……Yours sincerely, Elizabeth’. Meanwhile Gloucestershire saleroom Chorley’s is selling approximately 100 lots from the estate of Lord Charteris of Amisfield, a British Army officer and the longest-serving assistant private secretary to the Queen. Becoming principal private secretary in 1972, he was recently characterised in the Netflix series The Crown with the TV series latching onto his reputation as the Queen’s favourite courtier.

The auction on November 23-24 will offer presents from the Prince of Wales to Lord and Lady Charteris, several watercolours by his friend Hugh Casson (1910-1999), including two of Lord Charteris’s study at Buckingham Palace, and photo signed by both The Queen and Prince Charles showing them sitting with a group of statesmen.

On retirement from his royal role in 1977, the Charteris’ family moved to the Cotswold village of Wood Stanway, and the following year Lord Charteris was appointed Provost of Eton College, a position he held until retiring in 1991. 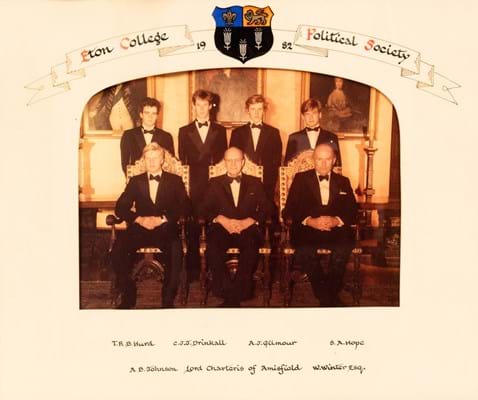 Several photographs of Charteris seated with members of the Eton Political Society, including Boris Johnson, his brother Leo and Jacob Rees-Mogg, will be offered at the auction.

With other items also from his Gloucestershire family home including antique furniture and porcelain, the collection has an overall estimate of £15,000-20,000.