ATG’s weekly selection of items that caught bidders’ eyes includes a rediscovered doucai porcelain vase with Qianlong marks that made over seven-times estimate in Hampshire. A classic tale of discovery in the saga of the Chinese boom, a rare doucai porcelain vase, with Qianlong marks and probably of period, led Hannam’s sale at Selborne, Hampshire on May 3.

The 8in (20cm) tall vase was spotted by Hannam’s junior specialist David Parry among bric-à-brac during a routine valuation. As with all the best tales, the owner, whose father bought it in Hong Kong in the 1980s, had no idea of its worth. A near identical mid-18th century vase is illustrated in the 1993 Taiwan publication Yeh Pei-Lang, Gems of the Doucai. Portrait of Sir George Rawdon by a follower of Robert Walker – £11,000 at Dreweatts.

Dreweatts sold the contents of Rawdon Hall, Yorkshire, home of the Rawdon family for more than 425 years on May 10.

Many of the works had not been offered on the market before including this oil on canvas portrait of the 'Rt Hon Sir George Rawdon, 1st Baronet, Commander of the King's Army in Ulster. Born 1604'.

The picture, painted by a follower of Robert Walker around the time George Rawdon (1604-84) was made a baron in 1665, was commissioned for Rawdon Hall. It left the property with a family member in 1870 but returned there in 1947.

Sir George had made his fortune through the patronage of the Conway family. He was a successful military commander acting as secretary to the first and second Viscounts Conway, and through marriage to the sister of the first Earl his influence grew further. He rose to prominence serving in Ireland following the Catholic rebellion in Ulster in 1641. An iron lock presented to William Penny Brookes – £2600 at McTears.

This large iron lock and key is inscribed Presented to WP Brookes Esq by a Member of the Wenlock Olympian Class May 18th 1869. The brass slide catch enclosing the keyhole is also engraved Wen.

William Penny Brookes was the founder in 1850 of The Wenlock Olympian Games that were created ‘for the promotion of the moral, physical and intellectual improvement of the inhabitants of the town and neighbourhood of Wenlock’.

Famously Baron Pierre de Coubertin visited the games in 1890 and, inspired, founded the International Olympic Committee four years later. He later wrote: ‘If the Olympic Games that Modern Greece has not yet been able to revive still survives there today, it is due, not to a Greek, but to Dr W P Brookes’.

Sadly Brookes died four months before the first modern Summer Olympic Games held in Athens in 1896 but his influence lived on, not least in the naming of Wenlock, one of the mascots of the 2012 London Games.

This padlock was perhaps a prize at the 1869 event in one of the industrial categories. Offered at McTears in Glasgow on April 29, it got away just below estimate at £2600. 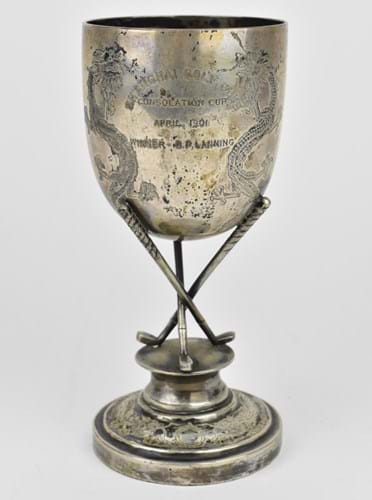 Estimated at £120-150, this modest 7in (17cm) high Chinese export silver golfing trophy sold for £5500 at Bourne End Auction Rooms in Buckinghamshire on May 4.

It is marked to the base Luen Wo for the Shanghai retailer on the Nanking Road that provided work for a network of designers and artisans in the last quarter of the 19th century and the first quarter of the 20th century.

The game of golf has only a brief history in China. While chuiwan, a stick and ball game with some similarities, was played as early as the Song dynasty, the sport effectively arrived in China with the advent of the Shanghai club in 1896.

At the time, the so-called Paris of the East with its dance halls, international clubs and foreign-run racetrack, was the place to be for rich Europeans in Asia. However, with the advent of Communism (the party held its first meeting in Shanghai in 1921) golf was banned for many years as being too bourgeois.

This trophy, therefore, marks a brief flowering of a game that is once more growing in popularity in China. European missionaries, present at the Chinese court since the 16th century, contributed significantly to Qing art. The emperor Kangxi (1662-1722) and his successors Yongzheng (1722-35) and Qianlong (1736-1795) all welcomed the artistic and technical advances Jesuits brought to the court including the technique of painting enamels onto metal.

This rare 18th century painted enamel ‘Jesuit’ bowl is decorated with European subject matter – a continuous landscape scene of ladies and gentlemen at leisure attended by young boys dressed as putti. Measuring 5in (12cm) across, both the base and the cover are inscribed in black enamel with an eight-character Jesuit mark.

Using early enamel colours, it probably dates to before 1735, and would probably have been made for one of the Jesuit missionaries at the Qing court