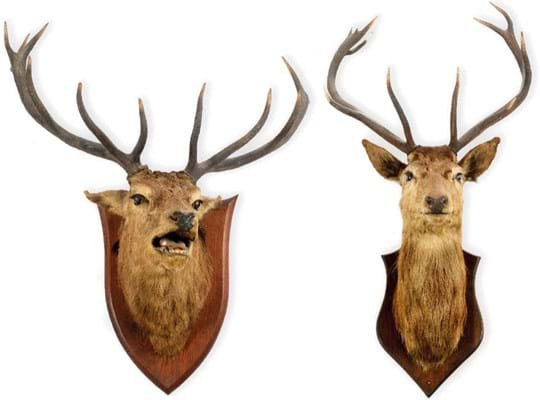 The collection, with estimates between £80-800, is led by a Montblanc presentation set which was given to Lee and his wife, the Danish painter and former model Birgit ‘Gitte’ Krøncke, on their 50th wedding anniversary. Fountain pens by Parker, Montegrappa and Graf von Faber also feature.

This 8in (20cm) high copper jug embossed with hearts is a product of the Keswick School of Industrial Art. The school was founded in 1884 by clergyman Hardwicke Rawnsley and his wife Edith as an evening class in woodwork and repoussé metalwork at the Crosthwaite Parish Rooms in Keswick, Cumbria.

Designed to alleviate unemployment, the enterprise prospered and within 10 years over 100 men were attending classes. The school was run for a century until forced to close in 1984.

The jug is guided at £120-180 in George Kidner’s April 6 auction in Lymington, Hampshire.

A pair of 1970s ‘Tube’ earrings made by British jeweller Grima feature in Fellows’ antique and modern jewellery sale in Birmingham on April 13. Founded by Anglo-Italian designer Andrew Grima (1921-2007), the society jeweller designed pieces for the royals and stars of the 1960s and ‘70s. Estimate £300-400.

A selection of sporting items from a deceased estate in Exmoor has been consigned to Greenslade Taylor Hunt’s Spring Sporting Sale on April 7 in Taunton.

The fresh-to-the-market collection comes from the estate of Diana Barton of Withypool, whose family lived in the Cotswolds before moving to Somerset. Taxidermy features strongly and includes this pair of Scottish stag heads, one bearing the taxidermist’s label for Charles Kirk of Glasgow, and each estimated at £300-£500.

Several sets of mounted antlers from the Quantock, Tiverton and Devon Staghounds will also feature alongside a fox mask by Spicer & Sons of Leamington.