Celebrated work in German issued from a Basel press sells for six figures in Stockholm auction. Judged by the editors of Printing and the Mind of Man to be “perhaps the most celebrated and most beautiful herbal ever published”, De Historia stirpium was compiled by the physician and botanist Leonhart Fuchs.

De Historia… was first published in latin under that title in 1542, but in the following year emerged from that same Basel press, that of Michael Insingrin, as the Neu Kreuterbuch. It was a copy of that German text edition which made SKr1.25m (£112,610) in a Stockholms Auktionswerk (25/15% buyer’s premium) sale of June 20.

Some 400 of the 517 fully coloured woodcuts depict plants native to Germany, but it also features plants from other lands, among them recently discovered American specimens.

In a period binding of blind-tooled pigskin, this copy – once in the great library of the Sack family of Bergshammar – also included seven full-page ink and watercolour drawings.

The drawings by Viet Rudolph Speckle, from which Albert Meyer and Heinrich Füllmaurer made the woodcuts, were principally based on plants raised in Fuch’s own medicinal garden at Tübingen. Portraits of all four men are also found in the book.

Live on the veg

John Hill’s The Vegetable System…, a profusely illustrated study of the plant kingdom, was the most comprehensive botanical publication of the 18th century, running to 26 volumes published in the years 1759-75.

Containing 1546 engraved plates, only the 300 in the last five volumes uncoloured, the work had enjoyed the patronage and financial backing of Lord Bute, who had begun laying out Kew Gardens in 1760 and engaged Hill as an adviser.

However, disputes between the two men eventually led to Hill’s bankruptcy and contributed to his early death in 1775.

This set, once owned by Henry Lowther, Earl of Lonsdale, was later in the library of the Society of Herbalists and the great botanical collections formed by Arpad Plesch and Robert de Belder. In 1987 it made £50,000 as part of the latter’s Sotheby’s sale, but 10 years on it reappeared at Christie’s New York to sell for $160,000 (then £97,600).

As previously noted in ATG No 2302, a copy of Besler’s celebrated Hortus Eystettensis, the most highly valued lot in a Christie’s London (25/20/12% buyer’s premium) sale of July 12, failed to sell, but there was success for other King Street lots, some with a distinguished provenance and recent saleroom history. 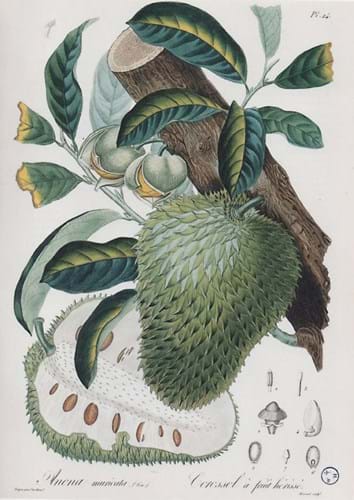 A plate from the Tussac Flore des Antilles sold by Christie’s London for £110,000. It depicts a fruit of Annona muricata, a species of the custard apple tree – nowadays often known as soursop, due to its slightly acidic taste when ripe.

The author spent many years in the West Indies in the late 18th century and the preface presents a vivid account of his travels and adventures, including an account of the Haitian slave rebellion led by Toussaint- L’Ouverture. These were dangerous times and in 1802 Tussac had to flee his burning and besieged house and abandon the 2000 drawings he had executed.

Fortunately, the manuscript was saved, along with his herbarium, and the work was completed back in France. To this end, he often had to resort for illustration to work by other botanical artists and many of the 140 stipple engraved, colour printed and hand-finished plates derive from originals by Poiteau, Turpin, Prêtre, Redouté, Risso and others.

Johann Kniphof’s Botanica…, published in a dozen parts in the years 1758-64, is one of the earlier and finer works to feature nature-printed illustrations – here mostly produced using coloured inks, with hand colouring reserved for the plants’ flowering portions.

Illustrated with 475 coloured engraved plates of medicinal, culinary and other interest, it is a beautifully produced work that took 10 years to complete.

However, in 1999, again at King Street, the Suchet library copy set a record that this distinguished copy has only now matched.

Also sold at £38,000 was a copy of the 1846 edition of PA Poiteau’s Pomologie Français, a much enlarged version of Duhamel du Monceau’s earlier Traité des Arbres fruitiers.

Boasting 420 colour printed and hand-finished, stipple-engraved plates and bound in half morocco gilt of the period, this set was last offered at Sotheby’s New York in 1994, when it sold for what remains a record $72,500 (then around £46,000).

Tolkien writes early verses to get into the Hobbit