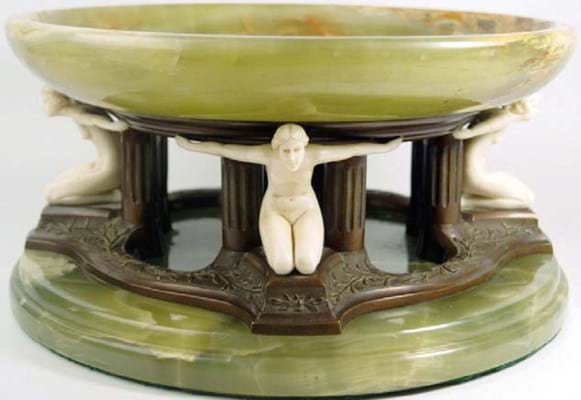 For nearly a century before its closure in 2011, the bar was frequented by the rich and famous, used as the venue for important political meetings and featured in several films including Alfred Hitchcock’s North by Northwest.

The 2ft (61cm) high press, made in the early 20th century by Caliar, Bayard & Cie Paris, was acquired from the hotel by the vendor in 1982 for the sum of $25,000. Featuring a pair of stylised tusked elephant heads on four flared elephant feet, the press is guided at £5000-8000 in John Nicholson’s February 23 sale in Fernhurst, Surrey.

Pictures by Duncan Grant, Ben Nicholson, Edward Bawden, Fred Yates and Mary Fedden all feature in Sworders’ Modern British Art sale on February 14 in Stansted Mountfitchet, Essex. Among the highlights from the nearby Great Bardfield group of artists is this 20in x 4ft 7in (52cm x 1.4m) linocut of Liverpool Street Station by Edward Bawden (1903-89). Dated to 1960 and numbered 2/40 artist’s proofs, it is guided at £10,000-15,000.

This Grecian Maidens bowl by Ferdinand Preiss (1882-1943) is one of four creations by the German sculptor to be offered in Wright Marshall’s February 11 sale in Knutsford, Cheshire.