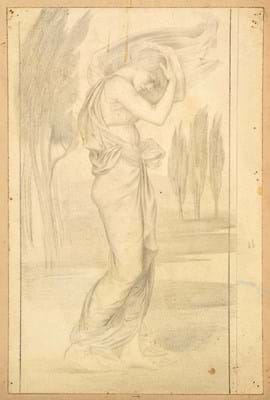 The catalogue cover lot, titled Once Upon a Time, is thought to have last appeared on the market over a century ago and was consigned from a collection in Berkshire. Its only label dated from the Oil Painters exhibition of 1904 – the same year Frampton painted it.

The picture shows the heavy influence of Pre-Raphaelite Edward Burne-Jones (1833-98) on the English painter in its medieval-romantic subject, style and vivid use of colour. Frampton had encountered the work of Burne-Jones at the artist’s posthumous exhibition in London in 1898-99.

The show struck him “with the force of a very revelation, opening his eyes to the supreme possibilities of the human form in decoration”, wrote The Studio magazine in 1918.

Nathan Winter, picture specialist at Dominic Winter, described it as “a stunning jewel-like small picture with no blemishes or defects to entertain and that really pushed it along all that way”.

Top-seller was a sketchbook of 22 pastel anatomical studies, the date of which is not known. Comprising both loose and more finished compositional sketches, and detailed life studies of nude and clothed figures, it was fiercely contested, eventually selling to the trade at £9000 against £1500-2000 estimate.

A passion for Greek mythology was evident in an 18 x 12in (45 x 30cm) pencil preparatory study of Deianira, the doomed wife of Heracles. De Morgan chose to depict the moment before Deianira kills herself, when she realises she has unwittingly killed her husband with a poisoned cloak.

The artist went on to paint an oil of the same subject, which sold at Sotheby’s in 1971. It was acquired then or later by the De Morgan Foundation but was destroyed in 1991 when a fire raged through an art storage unit in south-west London, where some of the foundation’sart collection was being held. The drawing sold for £2600 against a £700-1000 estimate. The other stand-out collection in the sale was a consignment of watercolours and paintings of Suffolk by the 19th century Melton-born artist, Thomas Churchyard (1798-1865).

The 16-lot group formed the life-long collection of 87-year-old Eric Charlesworth, who trained to be a priest in Woodbridge (the home of Churchyard) and was rector of Kenton.

Self-taught and working in a small format, Churchyard painted the Suffolk landscape emulating the great John Constable (1776- 1837), who he met and would almost certainly have seen painting around the county.

Outside Suffolk, Churchyard is perhaps best known in the art world for a small miscatalogued sketch which was attributed to him and offered at Christie’s South Kensington in 1998. Estimated at £600-800, it turned out to be a missing work by Thomas Gainsborough (1727-88) and went on to sell for £30,000.

The Dominic Winter collection represented a sizeable chunk of Churchyard’s work coming on the market at once.

“He normally averages around 10 a year at best,” said Winter.

Described as “sketchy, loose and almost unfinished”, these small works appeared at first glance to be rather insignificant, added Winter, but they proved to be hotly contested. More than three-quarters of the buyers on the day were based in Suffolk. Almost every lot got away comfortably above their attractive guides to total £21,280.

Those with a direct Woodbridge connection sold best, such as lot 305, a 9 x 12½in (22 x 32cm) oil on board view of the River Deben. The oil, which featured a few faint wisps of smoke from a steam train in the centre, sold for £4200 against a £400- 600 estimate. The price is among the highest for the artist at auction.

Another strong price was set for an even smaller Woodbridge landscape, roughly the size of a paperback book, which sold to a private collector from Woodbridge itself at £2800 against a £400-600 guide.