It was, said specialist Michael Jeffery, “one of, if not the finest, collections of Burmantofts put together by a private individual”. The 700-plus Victorian art pots from a south of England collection offered at Woolley & Wallis (22% buyer’s premium) in Salisbury on June 22 covered all aspects of the Leeds factory’s output, from conservatory heaters to grotesques.

Some visitors had taken the opportunity to view highlights at the firm’s London office in early June. Others perused the 300 lots online or via a single-owner catalogue. But for the full impact of this wall-to-wall collection it was necessary to visit the saleroom. All those who made the journey (there were 64 different buyers for a near sell-out sale) declared it the finest selection to come to auction.

The best productions of the Burmantofts factory are admired well beyond the confines of their native Yorkshire.

As reported in ATG No 2298, the sale was topped by a Neptune charger sold to a collector of Victorian decorative arts at £13,000.

At their best, Burmantofts’ low-fired wares in the Isnik palette rival the output of William de Morgan. Most pieces carry the initials LK that 1891 census records suggest is a factory worker by the name of Leonard King.

He remains an enigma (until recently LK had acquired the more exotic moniker Louis Kramer), but he was a key figure responsible for some very skilful and stylish decoration.

This monumental plaque assumes extra significance as an exhibition piece. Alongside a large impressed Burmantofts Faience mark, it is inscribed both with the date [18]87 and the LK monogram plus a curious ‘ice cream cone’ symbol, thought to denote pieces made for the Royal Yorkshire Jubilee Exhibition in Saltaire.

The Burmantofts stand in 1887 was something to behold (among the exhibits was the 3ft 8in/1.02m high vase now on display in the 1853 Gallery in Salts Mill). The following year the company, already selling its wares from Harrods and Liberty’s, opened its own showroom in London. Saltaire, perhaps the launch pad for the Anglo-Persian wares, was also a showcase for a series of plaques painted with ladies in Middle and Far Eastern costume by William James Neatby (1860-1910).

The Barnsley-born artist is best known for his work at Doulton, including the 1902 murals in Harrods’ food hall. However, he worked in Leeds for six years from 1884.

W&W’s collection had been 25 years or more in the making. Jeffery – who had taken the call “out of the blue” earlier this year – described the owner as “well-known in the collecting community but a man who typically bought below the radar”.

However, several trophy items from regional sales were making a relatively swift return to auction.

Clearly, in the light of a big test for a niche market, most items were offered with sensible estimates, with the vendors content to take the rough with the smooth.

A 20in (46cm) charger by King depicting Poseidon riding a shell chariot pulled by seahorses is among the pieces pictured in Jason Wigglesworth’s Burmantofts Faience: A Compendium of Designs, and was last at auction in 2004 when it sold for £4800 at Fieldings of Stourbridge. This time, estimated at £2000-3000, it took £4200. In relative terms it was not expensive: a similar item by De Morgan would be much more. Like Leonard King, relatively little is known about Joseph Walmsley (1865-1956), but he is closely associated with two factory ranges – the high-fired tube-lined Partie-Colour wares and those with experimental lustre glazes.

Among the best-known Partie-Colour wares is a large bulbous form jardiniere and stand decorated in low relief with peacocks in a formal garden setting.

A rare Partie-Colour jardiniere modelled in low relief with cobalt blue comical owls perched on a bough (another piece pictured in A Compendium of Designs) sold at £1400 (estimate £200-300). It might be the example sold by Louis Taylor in Stoke-on-Trent in 2013 for £620.

Lustre wares were produced at Burmantofts from the 1890s. Not all bear favourable comparison with the output of contemporary rivals such as Bernard Moore or Pilkingtons but they are nonetheless desirable. Many carry the painted JW monogram.

A 14in (36cm) wall plaque well painted with a galleon at full sail within a border of scaly fish, in golden lustres on a ruby lustre ground, took £500. A near pair of 7in (17cm) high cylindrical form vases painted withbands of foliage in red and golden lustre took £650.

“Some of the grotesques and animal models were previously undocumented

In keeping with an operation that began life as the Wilcox Brickworks, tile production was a key element of the Burmantofts output.

A series of sculptors and architects was engaged to produce relief-moulded designs for tiles and plaques, including the Frenchman Pierre Mallet (1836-98), who also designed for Minton, and Victor Kremer (1857-1908), who later worked at Sarreguemines.

They formed the basis of the article published in 2016 by the Tiles and Architectural Ceramics Society, and many society members made a special visit to the sale.

Several tiles created by Mallett during his time in Leeds from 1885-87 are signed in the mould or to the reverse, including a range of large 12in (30cm) square tiles modelled in relief with British birds.

A single Mallett bird tile in a blue glaze took £350.

A pair of tube-lined plaques by WJ Neatby gives a further clue to his oeuvre. Each 12 x 20in (30 x 50cm), they were titled and signed The Maide at The Inn and The Stayble Man. They sold as expected for £950.

The sources of many other Burmantofts models is a matter of conjecture. There are close links between the factory and the Linthorpe Pottery. Many workers were taken on from the Middlesbrough factory when it closed in 1889. Among the more curious Linthorpe creations is a figural pin tray modelled after a Fijian libation vessel in the British Museum.

In Michael Whiteway’s Christopher Dresser A Design Revolution, the pottery and the wooden vessel are pictured side by side. Burmantofts produced its own version of the same dish (model no.1802). They are rare, although others have been sold by Fieldings in 2015 (£230) and by Peter Wilson of Nantwich in 2009 (£380).

The example here in a turquoise glaze with applied glass eyes doubled hopes at £600.

Dragon vases and grotesques are a collecting subset of their own. Some of the grotesques and animals offered here, pieced together from regional sales across the past decade, were previously undocumented models.

Rarities included a tortoise in a green glaze with applied glass eyes (£380), a trio of three mice, glazed in pale green and mustard yellow (£700) or a series of dragon models with unusual lustre glazes that took bids £300-380 each.

It was pieces such as thesewhich gained momentum from being part of such a huge gathering.

Others – such as group lots of monochromes, jardinieres and some of the generally less commercial barbotine wares – also might have struggled in the context of a typical decorative arts sale, but thrived when pitched with modest reserves to a receptive audience.

It says much as to the nature of the £153,000 sale that, despite precious little in the way of pre-sale bids, all bar a small handful of lots were sold in the room, with the four unsolds swept up the following day.

However, there is a bargain or two at every sale and here – minus one of the leading buyers in the field – the odd piece represented great value.

For example, a foliate conservatory heater glazed in brown had sold for £1100 in 2011 when previously offered at W&W. This time around the winning bid was just £140.

With this most egalitarian of factories, there is something to match everyone’s pocket. 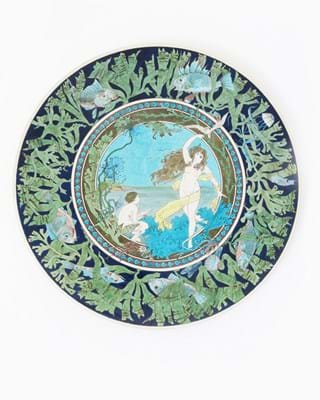