In this second part of ATG’s review of the various events held during Paris drawings week, we turn the spotlight onto one particular medium: the pastel portrait. The selection of highlights pictured here, all Old Masters, exhibit such time-honoured features as quality, rarity, market freshness and provenance. They are drawn from auctions at Artcurial and the Drouot, and the Salon du Dessin drawings fair.

French works in the limelight

It is appropriate, therefore, that it was a group of French works in this medium that stole the limelight at the Artcurial (25/20/12% buyer’s premium) sale on March 21 in the heart of Paris drawings week.

The 195-lot auction ranged from paintings by Old Masters to works by major 19th century names, but in honour of the focus on drawings at this time of year also featured a sizeable works on paper element.

These were early examples of the art of pastel dating from the 17th century and formed part of a general focus on 17th century French art in all media that front-loaded this event.

As such, they were not the brightly multi-coloured creations that Vigée Le Brun or la Tour were producing in the following century, but subtly toned renditions with touches of colour enlivening chalk outlines.

Market freshness was a common feature of these particular works. They included three by Simon Vouet (1590-1649) which were discussed at length in ATG No 2333.

Two of them were hitherto unpublished and they all had a 19th century provenance back to the Comte de Simiane. 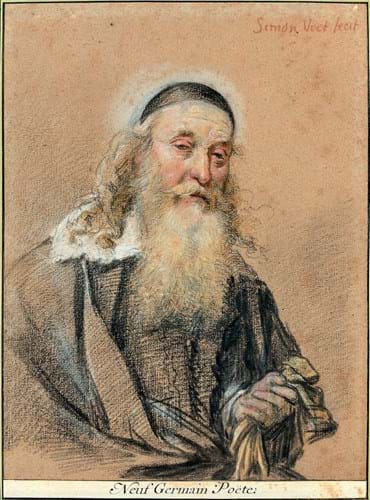 A fourth pastel portrait, and another unpublished work, was by Vouet’s near contemporary Charles le Brun (1619-90): a sensitive study of the writer Charles Perrault.

Both men worked at the court of the Sun King, so it was fitting that this portrait, whose whereabouts had been lost to scholars since the late 17th century when it featured in Perrault’s inventory, was secured by the Palace of Versailles which pre-empted it on the fall of the hammer at €91,000 (£82,730).

Another institutional purchase, but by a foreign museum in this instance, was made by the National Museum of Stockholm. It carried off a highly finished pastel portrait mounted on canvas by Joseph Vivien (1657-1734), a specialist in this medium. This had a provenance back to 1770 when it formed part of the sale of the collection of Ange Laurent de la Live de Jully.

Artcurial had identified the sitter as L’abbé Ambroise Lalouette, Louis XIV’s chaplain and canon of the church of Sainte Opportune in Paris. It sold for €80,000 (£72,730), the lower end of the estimate but an auction record for the artist notwithstanding.

Over at the Drouot

Artcurial may have produced some spectacular result for pastels, but with so many works on paper on offer in the numerous sales and fairs taking place it was no surprise it did not have the monopoly on works in this medium.

The portrait bears a couple of old labels to the reverse, one of which translates as pastel painted by Madame Vigée Lebrun and offered by Mad de Rivière, her niece, to Doctor Mollin as evidence of her great gratitude February 1844.

On this basis it is thought that the subject was Caroline de Rivière herself. It subsequently appeared in sales in 1892 in Paris and 1903 in London at Christie’s auction of the collection of Reginald Vaile, and has been in the vendor’s family since it was acquired from Leopold Levy in Paris in 1911. Charles-Antoine Coypel’s 22 x 19in (56 x 47cm) pastel portrait of a young woman representing spring or the sense of smell. A first-night purchase at the Salon du Dessin from Marty de Cambiaire.

And at the Salon du Dessin – the works on paper fair which is the fulcrum around which many of these Paris auctions have clustered – an early success emerged for Marty de Cambiaire. Among the numerous works that sold at the packed vernissage was the Paris dealer’s pastel portrait of a young woman emblematic of spring or the sense of smell by Charles-Antoine Coypel (1694-1791). It was bought by an overseas museum.