For Paul Nunn, founder of antique clocks and barometers dealership Olde Time, the virtues of fairs and the internet have always been secondary to that of the physical shop. 4. Paul Nunn (left) with the Duke of Kent at a recent edition of the BADA fair.

As for social media: “I’m dead against it – I’m old-fashioned.”

Instead, his tactic to draw new and returning clients to his business is to host open weekends, the next couple of which take place on July 28-29 and August 4-5.

He launched these events around five years ago and its draw has been growing steadily. The invitations include a list of suggested places to stay, including self-catering cottages, luxury bed and breakfasts and country house hotels.

“We’ve got a lot of unusual things and we always have people here over the weekend. It takes quite a long time to get around all our stock and people can visit over the course of two days,” Nunn says.

If visitors do find themselves at a loose end, they are also provided with a list of activities in the nearby area, from Peter Beales (a rose-growing centre) to sampling whisky at St George’s Distillery.

During the open weekend, visitors are served refreshments as they browse the gallery’s selection of clocks, including everything from bracket and skeleton clocks to wall and carriage clocks. There are also barometers, barographs and a few select pieces of antique furniture on offer. In total, around 500 pieces of stock are available to admire and purchase. 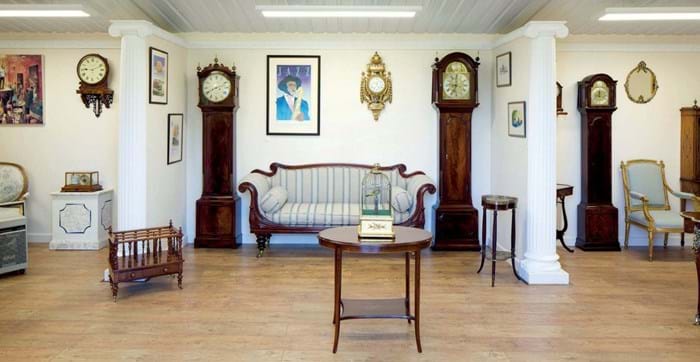 One of Olde Time’s showrooms.

These are spread out across three showrooms set in converted farm buildings at Nunn’s home in Wacton, Norfolk. It’s an ongoing project: following the success of the third, most recently opened space, he says that a fourth building is earmarked for conversion, though the project is still a little way in the future.

He started collecting clocks around 35 years ago and for the past 18 has been dealing at home and at fairs. In that time, he says, the market has slowed down.

Olde Time now focuses on around four or five fairs per year, a significant reduction in its former calendar, as Nunn started finding them quiet with a paucity of new buyers. However, he asserts that the claim that younger buyers are not interested in antiques is a perception, not reality.

“The trade has given up on younger buyers to some extent but I feel a lot of them are interested – they’re fascinated by the mechanical, for example

“The trade has given up on them to some extent. But I feel there are a lot of young people interested. They’re fascinated with the mechanical, for example, and are wowed by what we have,” he says.

Nunn recalls an instance a few years ago at the BADA fair (where Olde Time still stands) when a young girl aged about 12 came across a cuckoo clock on offer and fell in love with it. After long consideration, her parents agreed to buy the clock and since then, Nunn says, “we always have a Christmas card from them. It’s great to get them starting young and I’m sure she will become an avid collector.” As well as the open weekends, the gallery sends out regular mailshots to show off the best of their stock, and the website is full of highlights too.

Though Nunn does admit that the website generates a lot of interest, he still prides himself on “old-fashioned service”.

The clocks Olde Time sells are hand-delivered whenever possible. It could hardly be otherwise, he points out, due to the sensitivity of the mechanisms involved, and of course, his views on the personal touch.