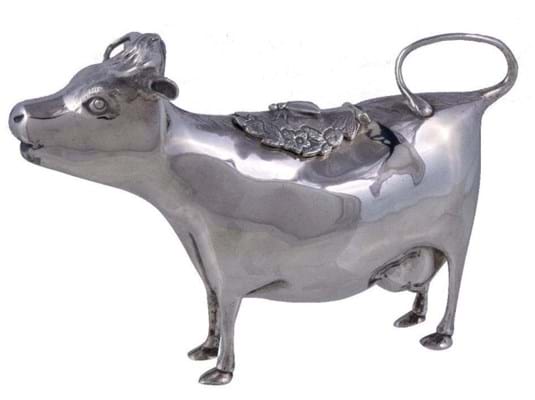 So-called ‘mystery clocks’ are given their name due to the ‘mystery’ surrounding their movement. A French figural revolving globe lamp example will be offered in the sale of Clocks, Scientific & Musical Instruments at McTear’s of Glasgow on June 8.

Estimated at £200-300, it features a 17in (44cm) high 17th century courtier holding a staff, with a spherical glass timepiece on top hand-painted with Roman numerals.

The ribbed baluster body has a white trail slip design and bears a St Ives mark and artist’s monogram to the base.

keysauctions.co.uk  or see this item on thesaleroom.com

A silver cow creamer by Asprey & Co will feature in a June 13 sale of silver, jewellery and luxury accessories at Dreweatts 1759 in Donnington Priory, Berkshire.

Made from black glass and bearing a Lalique signature to the base, the piece forms part of an 86-lot sale of car and motoring memorabilia from the Wolfgang Gawor collection held at Athelhampton House in Dorset.