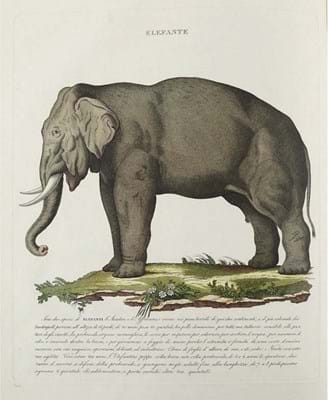 This Toby stoneware jar and cover, modelled as the ruff-collar-wearing dog from Punch & Judy, was made by the Martin Brothers c.1885.

Baschieri was a doctor from Modena, while Gazzadi was a poet and translator from nearby Sassuolo.

Only one edition in two volumes was produced, originally issued in 46 parts from 1843-46. The book depicts a range of species in their natural habitats, including the pangolin and the vampire bat.

A two-volume copy is estimated at £7000-9000 in a sale of books, manuscripts, maps and photographs at Lyon & Turnbull in Edinburgh on June 19.

A vast collection of photographs of the royal family will go under the hammer in a single lot at David Lay of Penzance on June 14.

The 4000 colour transparencies were taken by Col Vassa Voynovich, a Yugoslavian aristocrat who fled his native Serbia during the Second World War. He became a photographer and gained unprecedented access to the royals between 1949 and the early 1980s. The queen requested Voynovich photograph her in uniform during one of her first Trooping the Colour ceremonies.

The success of this photograph launched his career and he changed his name to John Scott to help him get work. The archive was passed by Scott to his assistant Judy Appelbee, who has consigned it for sale.