The current record for British studio pottery – a Hans Coper arrow-head vase knocked down at £305,000 (ATG No 2332) – was not set in Manhattan or Mayfair but at Bearnes Hampton & Littlewood in Exeter in March.

Among the provincial houses which spotted a gap opening in the market when Bonhams ended its specialist sales in 2008 were the likes of Mallams in Oxford, Woolley & Wallis in Salisbury and Adam Partridge in Macclesfield.

Today – as interest from London’s elite is renewed (see last week’s ATG) – all are in the possession of valuable client lists of both buyers and consignors.

Auctioneer Adam Partridge has been holding specialist studio potteries sales for more than a decade. This side of the business really took off with the £650,000 auction of the Firth Collection three years ago (ATG No 2214). Partridge was assisted by archaeologist and ceramics collector Jason Wood, who has ‘curated’, as he says, the specialist sales ever since. 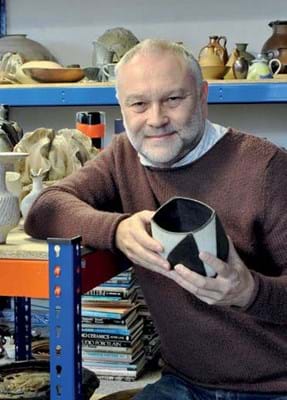 The October 11-12 sale, the biggest so far and the first two-day event, opens with another fascinating collection.

It was built up by Ruth Fitzpatrick, now 94, who was assistant to Elisabeth Zuckerman, the formidable director of the Bluecoat Display Centre in Liverpool during the 1960s.

Travelling around the UK amassing the best studio ceramics for the centre with Zuckerman and her successor Maureen Bampton, Fitzpatrick personally acquired pieces representing a history of British ceramicists working in the last half of the 20th century. “She had first dibs,” says Wood.

Wood sees demand continuing from three types of buyers: the high-end collectors happy to spend tens of thousands of pounds; the knowledgeable enthusiasts buying in two and three figures and providing the broad customer base; and decorators looking simply for conversation pieces which complement modern interiors.

“After one sale a decorator rang me to say he had smashed the large Janet Leach charger he had bought and did I have another,” Wood recalls. “I told him there would be other work by Leach but what he wanted was another charger of similar size and colours, and never mind who it was by.”

This trio of buying types play their part in keeping the whole market vibrant – which Wood believes it will be for many years.

“It is not just about record prices for Rie and Coper. The whole market is performing well,” says Marijke Varrell-Jones. She set up Maak Contemporary Ceramics in 2008 to handle private sales and to hold two auctions a year at the Royal Opera Arcade Gallery in Pall Mall.

“Ten years ago, the number of ceramic artists whose work was regularly selling at auction beyond the £2000 threshold was around a dozen. Today that number is more than three times that and growing year-on-year.” Top-end prices for potters such as John Ward, Emmanuel Cooper, Ian Godfrey, Felicity Aylieff, Joanna Constantinidis, Sara Flynn and many more back up her claim, while her May sale produced a record for Mary Rogers (b.1929).

The studio pottery movement: a timeline