Far more fluent in the language of jewellery and stones, the Georgians and Victorians would have immediately made the link between snakes and eternal love. The ouroboros – a serpent swallowing its own tail – was commonly understood as a symbol of eternity. 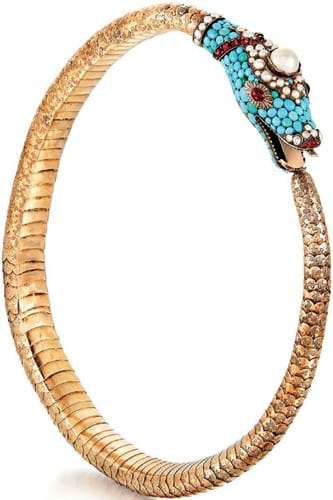 This gold, turquoise, garnet and half-pearl collarette dates from c.1830. Note the series of gold graduated articulated scalloped links, each engraved with a dot and striation pattern.

It came to sale at Roseberys London (23% buyer’s premium) on July 23 from a descendant of the influential Romer family of Lithuania. According to the family tradition, it was purchased in St Petersburg by a Polish nobleman, Hieronim Przeciszewski (1800-81), and later passed to his daughter Celina (1849-1916) who married into the Romer dynasty. Estimated at £3000-5000, it took £5200.

Several lots in the West Norwood sale exceeded estimate, not least a 1950s spray brooch with a cluster flower set with old brilliant-cut diamonds, pave diamond leaves and a square-cut diamond and diamond ribbon bow claw-set with a single oval-cut sapphire. The suggestion the latter was a natural Kashmir stone prompted bidding to £13,000 (estimate £1200-1800).