Eager for Hever armour as suit from famous collection reappears

In May 1983 the eyes of arms and armour bidders were fixed firmly on the £6m sale of the Hever Castle collection at Sotheby’s in London. 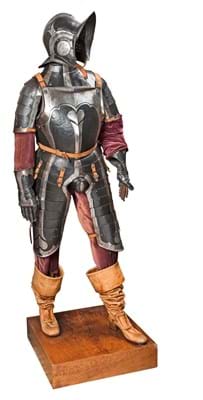 It was the star lot of the sale of the estate of Oleg Cassini at Doyle (25% buyer’s premium) on June 27.

Cassini, a Russo-Italian of noble birth, arrived in the US in 1936 when he described his possessions as “a tuxedo, two tennis rackets, a title and talent”.

That talent was as a costume designer. After success in Hollywood he found himself among US royalty as the man who created the highly influential ‘look’ for Jacqueline Kennedy – she dubbed him her Secretary of Style. He then became a household name in his own right.

The re-emergence of this significant suit demonstrates a new twist in the long-standing American romance with armour.

Cassini was a noble who gave up his title to become an American citizen but the love-affair began in the late 19th century as self-made tycoons looked to create a pedigree for themselves and provoked a flurry of activity among European dealers seeking to supply the demand for ancestral armour.

When the USA’s richest man, William Waldorf Astor, bought Hever Castle in Kent in 1903 he set about creating his own vision of aristocratic living, having declared in the 1890s that America was no longer a fit place for a gentleman to live.

Part of his vision was to create an armoury for Hever from scratch. Over the next 10 years dealers were once again scouring Europe for the best they could find.

The result was a collection of uneven quality that included masterpieces such the £1.75m suit made by Negroli for Henry II of France, and much more of a slightly lower quality.

London dealers featured strongly among the buyers at the 1983 Hever sale, but the ATG correspondent at the time noted that lot 51 went to a New York phone bidder. This, it turned out, was the Maximillian-style suit that ended up in Cassini’s collection at a price of £28,000. It had been acquired by Astor in 1903 from C Davis of London, with a provenance from the Dukes of Marlborough.

A few lots later in the 1983 sale there was another phone bid from New York, this time for a three-quarter suit of armour of the late 16th century etched with the arms of Enriquez of Castllle, bought by Astor from Partridge in 1905.

Once again it transpires that it was destined for the Oleg Cassini collection but it proved a less astute purchase. Having sold for £18,000 at the Hever sale (when bidding fever was certainly a factor in the prices achieved), it reached just $27,500 (£21,650) this June.

More good armour will go on offer stateside when Cottone of Geneseo, New York, offers this complete museum copy of a 16th century Maximillian-style fluted armour as part of the Peter Tillou collection on September 28. The suit comes with a provenance from London dealer Peter Finer and is estimated at $35,000-55,000.
Tags: