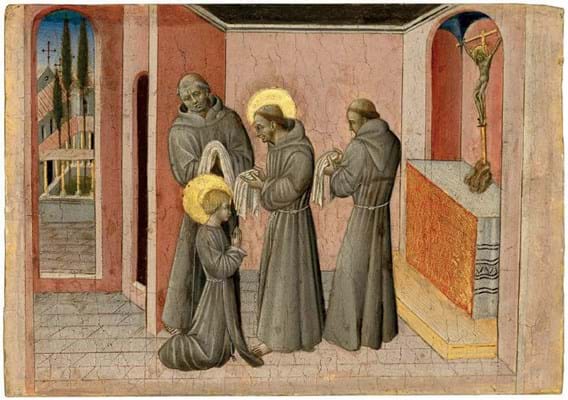 The highlight of Christie’s evening sale on December 3, the two paintings in tempera and gold came from an altarpiece created for an establishment of Saint Clare’s order, presumably in Siena.

They had been owned by Harry Fuld (1872-1932), a Jewish businessman whose family were forced to flee from Nazi persecution in 1939. The two panels ended up in Berlin’s Kaiser Friedrich Museum (later renamed the Bode Museum) but were returned to the family earlier this year.

The latest sale followed the restitution in August of a pair of Louis XVI bronze vases valued at $120,000 that had been consigned to Christie’s but were returned to the Fuld family after the auction house worked with the FBI to trace their provenance.

The first of the predella panels offered at the auction measured 8 x 12in (20 x 30cm) and depicted Saint Clare Rescuing the Shipwrecked. It was estimated at £1.5m-2m. The visionary subject and creative style added to its commercial appeal.

After a strong competition, it sold to a phone buyer who saw of f three rivals by repeatedly upping the bidding by ‘double-increments’ of £400,000. Knocked down at £4.5m, it set an auction record for the artist.

The same buyer secured the following lot, a similarly sized panel showing The Investiture of Saint Clare. Estimated at up to £800,000, it fetched £3m.

Portrait of a sculptor A dramatic competition came at Bonhams on the same day when a portrait thought to depict the high-ranking Venetian nobleman Paolo Morosin and catalogued as by the ‘circle of’ Giovanni Bellini (c.1430-1516) overshot a £30,000-50,000 estimate to sell at £390,000.

A lack of high-quality supply at the sales meant the overall series total was down to £49.1m with premium. This compared to £99.7m from the equivalent series last year.