A round-up of art and antiques news from the previous seven days, including Defra's notice regarding the movement of CITES-listed natural history items in the event of a No deal Brexit,

No deal warning for CITES-listed items

CITES-listed natural history specimens will no longer be able to pass through Dover or the Eurotunnel in the event of a No deal Brexit, the government has warned.

In a notice sent out by the Department for Environment, Food and Rural Affairs (Defra) it warned of changes to the transit of CITES-listed items.

It said in the “event of a No deal EU exit… CITES-listed animals and plants would require permits to travel between the UK and the EU, and would only be able to travel through certain ports”.

There are 23 points of entry/ exit listed under the government’s new guidelines.

Shake-up at the top of London art fest

London Art Week has reorganised its leadership team and appointed Amelia Higgins as director to take charge of day-to-day executive management. She formerly worked for Old Master dealer Johnny Van Haeften and has been with LAW since 2017.

Dealer Stephen Ongpin, a specialist in Old Master 19th and 20th century drawings, has been appointed chairman of the board, taking over from Lowell Libson.

New board members have also been appointed: Andreas Pampoulides of Lullo Pampoulides and Matthew Reeves of Sam Fogg. Meanwhile, Valentina Vico of Benappi Fine Art (of Turin and London) and Davide Trevisani of Maurizio Nobile (of Paris and Bologna) have taken on the newly created roles of international advisory members. Amelia Higgins and Stephen Ongpin who are part of the new leadership team at ‘London Art Week’. Image courtesy of London Art Week.

The positions have been created due to the growing number of internationally based dealers now taking part in the event.

The biannual event was launched in 2013 as a marketing and events platform to unite Master Drawings London, Master Drawings and Sculpture Week and Master Paintings Week.

An online course has been launched which aims to create a ʻvirtual environment’ for learning about the art market.

The course called ‘Art Market Economics’ is hosted on the Christie’s Education website and has been written and presented by Dr Clare McAndrew. Costing what some people may regard as a hefty $1500 for a video-based course (although Christie’s Education say that tutors will work closely with students, giving guidance and feedback as they progress), the programme is structured toward students thinking of entering the art industry as a career as well as those looking for professional development.

Kathleen Doyle, who was CEO for the past 25 years, will continue as chairman. Laura is the youngest daughter of company founder William Doyle, who launched the New York firm in 1962. She has worked at the family firm for nearly 20 years, while Mournet has held senior positions at Doyle for over 25 years.

More than 30 collectors pursued a 1987 issue of The Legend of Zelda (the last release of the game on the Nintendo Entertainment System) to $2800/£2150 (plus 20% buyer’s premium). Sealed versions of this title are difficult to find. 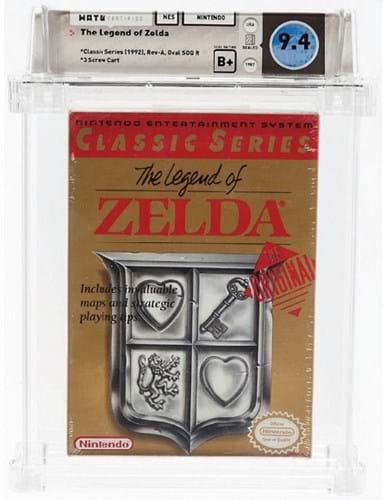 A copy of the first game in the longstanding Dragon Quest series, Dragon Warrior (1989), brought $550 from the most eager among 17 bidders. Originally released in Japan as Dragon Quest, it was renamed for release to Western markets and offered free to new and renewing subscribers to the Nintendo Power magazine. The game inspired 10 direct sequels and multiple spin-offs.

Excitebike, one of the launch titles for the Nintendo Entertainment System issued in 1985, took nearly two dozen bids before sel l ing at $950/£730.

The saleroom said it will offer more video game titles weekly with “some real rarities on tap for the February Signature Auction”.

The most clicked-on stories for week January 10-16 on antiquestradegazette.com

3 Movers and shakers: the latest arts and antiques appointments including new faces at Bonhams

The money raised so far from individual donations – a third of the required total – by the Charles Dickens Museum to buy a portrait miniature of Dickens by Margaret Gillies (1803-87) from dealer Philip Mould & Company. Painted in 1843, the portrait was rediscovered in South Africa last year and brought back to the UK and has been on display in Mould’s Pall Mall gallery.