Asian auction series now take place around the world throughout the year in the major centres of the art market. Paris held its latest staging this month at the beginning of the French capital’s Temps Fort or high season. 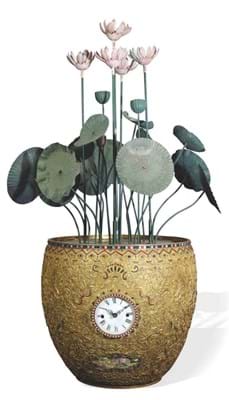 As of last year, under the title Printemps Asiatique, this has taken a new twist.

In emulation of the long-standing Asian Art in London and Asia Week New York initiatives, the traditional dedicated Asian auctions at Sotheby’s and Christie’s and other Paris independent rooms and at the Drouot centre have been augmented by a series of gallery shows staged by specialist Asian art dealers.

Probably the first highlight out of the blocks turned up at Drouot in a classic mixed-discipline sale devoted largely to European furniture paintings and works of art, rather than in a dedicated Asian event.

The sale, held by Gros & Delettrez (28% buyer’s premium) on June 6, featured a Qing dynasty musical automaton in the form of a vase of lotus flowers and leaves incorporating a clock and a musical movement which eclipsed its €30,000-50,000 estimate to make a hammer price of €1.22m (£1.09m).

Imperial Chinese fascination with elaborate western clocks and other works of art took off in the 17th century. Demand from the early Qing emperors then provided a steady stream of employment to European missionaries with knowledge of Western clockmaking.

Some of them went to the Chinese court to work alongside local craftsmen, bringing their horological expertise to the existing skills to satisfy imperial demand for this type of elaborate horology.

Special clockmaking workshops were created as part of the imperial workshops producing pieces that were thus an amalgam of Oriental and Occidental ingenuity and technical prowess.

The Gros & Delettrez automaton stands an impressive 5ft 6in (1.69m) high. The jardinière in copper, finely engraved with dragons and other motifs, is decorated with cloisonné enamel panels. It contains a cylinder musical movement and the automaton mechanism for operating the lotus flowers, which is activated via a pull string.

When originally catalogued, this was thought to be a Ming dynasty, 16th century piece and had a €3000-4000 estimate, but by viewing time the auction house had revised the attribution to Kingdom of Dali, 12th-13th century, Yunnan province, with an estimate on demand. The origins of these bronzes can be traced back to the Yuan dynasty when the Chinese court espoused Tibetan Buddhism. Although the identity of their creators, artists working in the imperial workshops, is not known, these works are now regarded as rare and significant.

It had a provenance back to the Parisian collection of André Schoeller (1877-1956) which came up for auction in Paris at Ader in 1956 and had been in the same family since then until consigned for auction.

Christie’s (25/20/13.5% buyer’s premium) bronze, a figure of Guhyasadhana Lokeshvara offered the next day, had been consigned from a Dutch collection and had been in the family since 1946.

It was smaller, at 4in (10cm), and the auction house suggested that it might have been part of a larger sculpture, perhaps one of the very elaborate Yongle gilt-bronze mandalas that have articulated petals and can be closed to form a lotus bud. The estimate on this was €50,000- 80,000 but it eclipsed that guide with the bidding finally closing at €750,000 (£669,640).

Other top results in this 240-lot auction left their estimates even further behind. An 11¼in (28.5cm) high pale celadon jade carved statue of the Buddha, shown seated in vajrasana on a lotus base within a richly decorated canopy, was dated to the Qing dynasty with an estimate of €1500-2000. It ended up making no less than €120,000 (£107,140).

Artcurial’s (25/20/12% buyer’s premium) contribution to Printemps Asiatique was a sale of around 200 lots on June 10. This was led by a large 12-leaf lacquer and paper screen from the Tongzi reign of the Qing dynasty.

Each of the 5ft 3in (1.6m) high panels featured a Buddhist calligraphic inscription from the Mahayana, a text that originated in northern India then spread across Asia. They were signed by the calligrapher Zongshi Yan Xu who was related to the imperial family and dated as the 10th year of the Tongzhi reign, (1870).