News In Brief – including new hires at Phillips

A round-up of art and antiques news from the previous seven days, including two key appointments at Phillips. Phillips key hires and a departure

Phillips has hired former Sotheby’s head of Impressionist & Modern art David Norman as chairman of the Americas and Elizabeth Goldberg as a senior international specialist of American arts and deputy chairman.

Norman has been consulting for Phillips since leaving Sotheby’s and setting up his own independent advisory business in 2017. He will now join Phillips’ New York office and starts his position immediately.

Goldberg joins in July from Sotheby’s, where she was most recently chairman of American art. Prior to Sotheby’s, she was vice president and head of American paintings at Christie’s in Los Angeles.

Meanwhile Phillips have announced that Alexander Payne is leaving after 20 years at the firm. He was most recently worldwide head of design and deputy chairman in Europe.

Phillips chief executive Edward Dolman said he “created a department that is world-renowned. He remains an internationally leading source of knowledge and expertise” in design. A hard tack biscuit, purportedly taken from a lifeboat during the sinking of RMS Lusitania, sold for £4000 at Henry Aldridge & Son’s latest Titanic, White Star and Transport Memorabilia sale (20% buyer’s premium) on April 27.

The ocean liner Lusitania, briefly known as the world’s largest passenger ship, was sunk on May 1915. The 104-year-old biscuit was bought by a private collector from Europe.

The £300,000 sale was the first for new entity Henry Aldridge & Son Ltd. Andrew Aldridge relaunched the business following the retirement of his father Alan in March.

Book dealership Bernard Quaritch is relocating to the Holborn area from Mayfair.

The firm is leaving South Audley Street for a five-floor, late 17th century townhouse at 36 Bedford Row which will open on May 7.

The new location will accommodate a reference library that had been housed offsite previously.

Quaritch’s Alexander Day said: “A lot of dealers have moved from Mayfair and we didn’t have a shop front so we didn’t have that benefit there. The new location means we are close to institutions such as the British Museum and the Wellcome Collection. It is a great location for us.”

The dealership, owned and run by book collector and investor John Koh, was founded in 1847 by German-born Bernard Quaritch.

The government is hoping to find a buyer for four works – three rugs and a painted screen – by Francis Bacon (1909-92) worth £3m in the hope of keeping them in the country.

The 6 x 6ft (1.83 x 1.83m) oil painted screen, c.1930, is valued at £2.5m and was part of Bacon’s first triptych and is believed to be his earliest surviving large-scale work. The three wool rugs were designed by Bacon for Royal Wilton carpets as part of their ‘Wessex’ range c.1929-30 and are valued at £186,000, £166,000 and £146,000. All four items are believed to have been sold at Christie’s in October 2018. The decision on the export licence applications for the three rugs and the painted screen will be deferred until July 25 which could be extended until October. 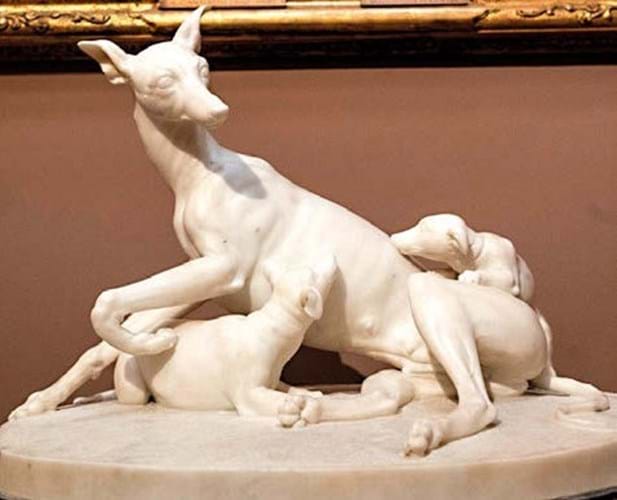 UK dealership Tomasso Brothers Fine Art has helped a Birmingham gallery to acquire a 19th century sculpture by the ‘Landseer of marble’.

Gott completed the sculpture while in Rome where he settled in 1822, living on a small pension from Thomas Lawrence, then president of the Royal Academy.

The most viewed stories for week April 25-May 2 on antiquestradegazette.com

The season that Manchester United first tasted league title glory, as displayed on a winner's medal (below) sold at Glasgow auction house McTear's on April 26. Awarded to Jack Nuttall for his role as assistant trainer for the side, the 15ct gold medal sold for a hammer price of £8500.