A selection of highlights appearing at upcoming auctions. This copy of The Custumers Alphabet, 1608, by Thomas Milles, a Sandwich customs officer and government agent, above, is annotated by the author and comes in a contemporary binding for the important Jacobean book collector Edward Gwynn.

It forms part of the library of the dealer Martin Orskey (1926-2019) to be auctioned by Dominic Winter in South Cerney, Gloucestershire, on June 26. Orskey was ubiquitous across the book trade for well over half a century and among the first 100 clients registered at the Dominic Winter saleroom. Printed by Valentin Othmar in Augsburg in 1548, it features many woodcuts by Hans Schäufelein showing scenes of ageing, harvesting and degustation, plus 14 manuscript pages with notes and measurement charts. Estimate £2000-3000. This rare ‘cobweb’ Valentine is part of an early 19th century album that includes poems and compositions in German, watercolour and pencil sketches and embroidered decorations on silk. At the May 30 sale of Autographs & Memorabilia at Chiswick Auctions in west London it is estimated at £500-700. Copy of William Shakespeare’s ‘Titus Andronicus, or the Rape of Lavinia’, edited by Edward Ravenscroft – estimated at £3000-4000 at Forum Auctions in London.

Housed in his home – Fox Pointe Manor in Anaheim, southern California – the rare book collection of radiologist Howard Knohl and his interior designer wife Linda reached more than 80,000 volumes. On retirement, the couple sold some books through Sotheby’s New York in 2016, but have chosen extra works for sale at Forum Auctions in London on July 10.

Selected 16th and 17th century English books from the Fox Pointe Manor Library will include this copy of the William Shakespeare tragedy Titus Andronicus, or the Rape of Lavinia, edited by Edward Ravenscroft (estimate £3000-4000).

This 1687 edition famously casts doubt on Shakespeare’s authorship of the play. In his prefatory note, Ravenscroft states: “I have been told by some anciently conversant with the Stage, that it was not Originally his, but brought by a private Author to be Acted, and he only gave some Master-touches to one or two of the Principal Parts or Characters; this I am apt to believe, because ‘tis the most incorrect and indigested piece in all his Works; It seems rather a heap of Rubbish then a Structure…” This set of 24 gores for a 3ft 6in (1.07m) terrestrial globe is based on the monumental example constructed by Vincenzo Maria Coronelli (1650-1718) for the French king Louis XIV.

A member of the Franciscan brotherhood who studied astronomy and geography, Coronelli travelled to Paris to create the ‘world’s largest’ globes that measured 15ft across, weighed nearly 4000lbs and cost Fr100,000.

By 1697, now famous throughout Europe, he had issued the first volumes in his atlas series – the Atlante Veneto (1691), the Corso Geografico (1692) and the first part of the Isolario (1696) – and published the first of four editions of Libro dei Globi, an ‘atlas of globes’ offering the gores for globes of five different sizes. He claimed the 3ft 6in globes were the most perfect ever made.

This set of 24 map gores has been assembled (from at least two sources) using maps published in Libro Dei Globi and the Isolario. It carries an estimate of £20,000- 30,000 at the sale of Rare Books, Manuscripts, Maps & Photographs to be held by Lyon & Turnbull in Edinburgh on June 19.

A group of letters sent during the Boer War and the First World War – estimated at £1000-2000 at Sworders of Stansted Mountfitchet.

group of letters sent during the Boer War and the First World War to Hilda Prestwich (née Waddington), the vendor’s great aunt. The 14 Boer War letters are mostly dated 1900 and are from her future husband Carl Prestwich.

Most poignant are those penned from the trenches by ‘Arnold, 28th County of London Battalion, Artists Rifles, British Expeditionary Force, France’. In a six-page letter dated January 4, 1915, he writes: “Our men at this point of the line forgathered with their Saxon opponents between the trenches & exchanged cigarettes… & arranged not to fire for the remainder of the day…. Another sportsman asked his officer permission to arrange a football match with the enemy but he drew the line at that. The trenches at this point vary from 75 to 220 yards apart, they are shallow & half full of water. It is impossible to deepen them because the soil is waterlogged, and the dead are buried all over the place.” Jonathan Swift’s satirical fable Travels into Several Remote Nations of the World… by Lemuel Gulliver, first a Surgeon, then a Captain of several ships – better known as simply Gulliver’s Travels – was published on October 12, 1726, and sold out within two weeks. This exceptionally large copy of Illustrations of The Book of Job by William Blake is one of 215 proof copies of the 1826 edition. It was published on the instigation of artist John Linnell as a means of helping the ageing Blake financially, the commission providing him an income of about £1 a week from 1823-25.

Although the 21 plates are dated March 1825, they were not actually printed until the following year. It carries an estimate of €10,000 at Ketterer Kunst in Hamburg in the Rare Books Auction on May 27. The letter, with numerous ink corrections and interlinear notes (most secretarial but some in Bruce’s hand) concerns US Senate legislation to regulate the sale of amphetamines and other diet pills. Bruce comments that “the bill… will create an unfair and present danger to the rights of people…” Estimate $3000-5000. The sale of Western Manuscripts and Miniatures at Bloomsbury Auctions in London on July 2 includes this illuminated manuscript copy of Walter Burley’s commentary on Aristotle’s Physica, dated 1439. The estimate is £30,000-50,000.

Burley (c.1275–1344/5) was one of the most prominent and influential philosophers of the 14th century. He was probably a Yorkshireman by birth, and after education in Oxford and Paris, served Edward III as courtier, occasional ambassador to Pope John XXII, Lord Treasurer and finally Lord Chamberlain, as well as bishop of Durham.

This manuscript of 300 leaves, in an early 19th century binding, was formerly owned by Ercole Giuseppe de Silva (1756-1840) at Cinisello Balsamo, Milan. It was included in the sale of his library in 1869, and apparently unrecorded since. 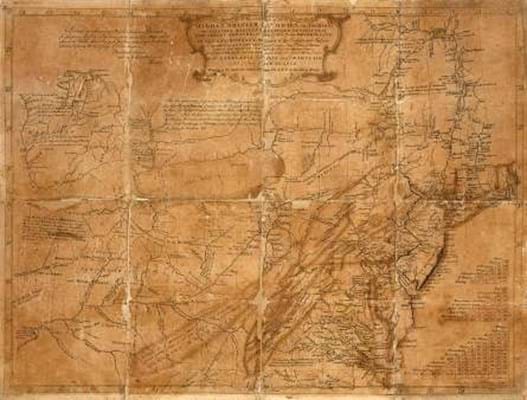 A pre-press version of a key map of colonial America carries an estimate of $30,000-50,000 at Swann Auction Galleries in New York on June 6.

Drawn up by the Welsh surveyor Lewis Evans, A General Map of the Middle British Colonies in America, published in 1755, set the standard for mapmaking in this region for half a century. Vast tracts of land were covered including, for the first time, those beyond the British frontier into the Ohio territory.

This copy, folded and backed on later linen, appears to be a working proof. While the general cartography is laid down, many of the finished elements are lacking – including Evans’ own engraved name and the name of the engraver, Benjamin Turner. Some major place names are missing (a few of them added in manuscript to be later engraved) while the numbers in the distance tables are also added by hand. Below the tables (that correctly correspond to the engraved version) is an ink signature: Lewis Evans… May 2, 1755.

“This is the maker of an 18th century American map literally signing off on the work-in-progress printing of his map, which would go on to have historic implications, 53 days before it was to be a finished product and ready to be officially published June 23, 1755,” said Swann specialist Caleb Kiffer. “Rarely, if ever, has a piece of an 18th century map’s publication story been preserved or offered for sale.” The Ladwell library was assembled by two dedicated ornithologists and bibliophiles from southern England who started collecting in the 1970s. What began as an agreeable diversion on bird-watching holidays soon developed into a serious interest. A significant library began to take shape, covering the avifauna of every continent with an emphasis on copies in exceptional condition or finely bound.

The first Ladwell instalment was sold by Dominic Winter of South Cerney, Gloucestershire, in March. The second, to be offered on June 19, includes a variety of important ornithological treatises. They include Harry Kirke Swann’s Synopsis of the Accipitre, one of only 12 copies of this 1922 work on goshawks and sparrowhawks including the 55 hand-coloured lithographs by renowned bird artist JG Keulemans. The sale of Important Manuscripts, Continental Books and Music at Sotheby’s on June 11 includes this calligraphic autograph letter written by Mao Zedong to the journalist Yang Yi c.1948-49.

Written in black ink with a brush pen on plain paper rather than official stationery, Mao (celebrated as a master calligrapher in his lifetime) acknowledges receipt of Yang Yi’s letter and tells him that he is available every afternoon, the only problem being that his mother is unwell. It was written at a late stage of the Chinese Civil War as Mao, then a guerrilla leader, came closer to victory over the ‘paper tigers’ of the Guomindang.

Mao’s correspondent in this letter, Yang Yi, was a trusted Communist cadre and family friend of Mao. In January 1948 Yang Yi had joined the party’s news mouthpiece, the Xinhua New Agency, and was sent to work in northern Shaanxi. ‘An Essay Towards a Natural History of Serpents’ by Charles Owen. This first edition carries an estimate of £300-400 at Tennants, Leyburn, North Yorkshire.

Presbyterian minister Charles Owen drew on a wide variety of sources for his 1742 publication An Essay Towards a Natural History of Serpents. Including seven illustration plates, the text explores the beliefs – mythological, biblical and classical – that surround serpents and other venomous creatures and reptiles.

This first edition carries an estimate of £300-400 at Tennants, Leyburn, North Yorkshire on June 7. Tintin sheet for the cover to the 139-page saga 'Tintin in the Land of the Soviets', offered at Heritage of Dallas, Texas. Image copyright: Hergé-Moulinsart 2019.

This 11 x 12in (27 x 30cm) sheet provided the cover to the issue dated February 13 as an introduction to the 139-page saga Tintin in the Land of the Soviets. The scene shows the hero carving a tree trunk into a makeshift propeller for his plane, watched by a heavily bandaged Snowy.

This signed ink on paper drawing with gouache corrections forms the headline lot of the auction of European comic art at Heritage of Dallas, Texas, on June 8. The sale at Irish auction house Fonsie Mealy on June 18 at The Talbot Hotel in Stillorgan, Co Dublin, will include this first edition copy of James Joyce’s Ulysses. One of only 100 signed copies from the full edition of 1000 printed on Dutch handmade paper (this one is numbered 30), it is bound by Buddenbrooks of Boston with in Art Decoinspired black and gilt morocco.

The saleroom believes it is the first time that a true first signed edition of Ulysses has been sold at auction in Ireland. In writing the Summa…, Pacioli – who shared a home with Leonardo da Vinci in Milan for five years – sought to include all the mathematical knowledge available at the close of the 15th century. A synthesis of Islamic and Indian science and the forgotten wisdom of the ancient Greeks, it includes mathematics, computing, and is the first published description of double-entry book-keeping.

“Pacioli’s achievement is one of the great untold stories of the Renaissance,” says Christina Geiger, head of books and manuscripts at Christie’s. “As Leonardo and others made revolutionary strides in art, and Machiavelli did for politics, so too did Pacioli for business. From double-entry book-keeping to probability theory and computing, the mathematical principles of the most vital features of contemporary finance are all present in the Summa de arithmetica.”