The market for both film and music posters is booming but original artwork for such designs can also be a very collectable option for buyers. Any finished poster will have a corresponding original design – or several – which adds another dimension for collectors wishing to broaden their horizons.

In the film poster field as a whole the buying trend is very positive, particularly for the crowd-pleasers such as James Bond, Star Wars and Hammer horror which now regularly attract five-figure results at auction for the best examples.

That sort of price level is also being experienced for the rarer original artworks, as evident from several auctions held recently.

Coming up, Surrey saleroom Ewbank’s first entertainment collection for 2020 includes a whole group: the WE Berry Movie Poster Artwork Collection, which will be offered in a dedicated sale on February 28.

“This is a particularly interesting collection because it includes hand-painted artwork related to the Bradford firm of WE Berry, one of only three printers in Britain that specialised in printing large posters for cinemas,” says specialist Alastair McCrea. “They were in business from 1920-90 and printed a lot of posters for films made by Rank and at Ealing Studios.”

The National Science and Media Museum in Bradford has an archive of WE Berry posters and Ewbank’s says it is expecting further institutional interest at the sale.

Posters and entertainment memorabilia in general has become a big part of Ewbank’s business, making up a premium-inclusive £1.25m total in 2019 – overtaking jewellery as the firm’s biggest earner. The first year of standalone entertainment auctions in 2013-14 made combined around £225,000 including premium.

Last year two significant consignments came to market: the Anthony Duggan collection of movie posters in August and the Andy Johnson collection in December. That followed the inaugural Bond and Beyond auction in February. An original hand-painted mixed media artwork of Marlon Brando by Bob Peak, signed clearly to the right-hand side, sold for £13,000 (plus 28.8% buyer’s premium inc VAT) against an estimate of £1500-2500. This is the same artwork as seen on the One Sheet and British Quad film posters.

It was one of dozens of items (including the orrery which was our Pick of the Week, ATG No 2426) consigned from the estate of Elliott Kastner (1930-2010), the American film producer of Missouri Breaks as well as Where Eagles Dare (1968), The Long Goodbye (1973) and Angel Heart (1987). The majority of these items were in his Pinewood studio office. The artwork was given to him by Peak as a gift.

A second example of original art from Missouri Breaks showing Jack Nicholson sold for £6500 (estimate £1500-2500). Both works were bought by the same UK online bidder.

Galaxy far away within reach Flying the flag for the ever-popular Star Wars franchise was poster artwork sold at Sotheby’s in London and Bonhams in Los Angeles.

The designs of Tom Chantrell are well known but those of Tom Jung are also highly sought after.

According to Sotheby’s: “Very few original Tom Jung concept artworks have ever surfaced. Owing to the fact that each artwork is unique, they are highly prized by Star Wars collectors. Jung’s work on the Star Wars poster campaign is among his most celebrated work.”

Jung also worked on designs for films such as The Towering Inferno (1974) and Raging Bull (1980).

Sotheby’s (25/20/13.9% buyer’s premium) held a Star Wars dedicated online sale which ended on December 13. One of the highest prices came for original concept artwork by Jung for the American poster campaign to promote the first Star Wars movie in 1977 (later dubbed A New Hope).

It features Luke Skywalker and Princess Leia in the foreground, in front of Obi-Wan Kenobi, who in turn is standing in front of a menacing Darth Vader. The artwork also features a small Stormtrooper in the left foreground. This artwork has all the major elements that Jung went on to use in his ‘style A’ American poster, although the final design excluded Obi-Wan Kenobi and the miniature Stormtrooper.

Part of the appeal of such conceptual work is of course being able to compare the finished article. However, in the same auction Sotheby’s offered another intriguing option: a printer’s proof showing this design.

According to Sotheby’s: “Owing to the huge popularity of this film it ran continuously in the US for over a year. There were four different printings of this style A US one sheet. This first printing has the original NSS number of 77/21-0, while the next three have different information. This piece is a printer’s proof of the first printing and has the colour matching strip along the left-hand side of the poster.”

Also making five figures was another original Jung artwork, this time for the second film, The Empire Strikes Back (1980). Jung worked on different designs before finalising the US poster artwork.

This dramatic piece, featuring an imposing Darth Vader with an outstretched arm, and his charging Stormtroopers, is very close to the finished poster, with subtle changes including the added image of Princess Leia alongside Han Solo, and an image of Luke Skywalker on the other side.

An example of the final poster was included in this lot, allowing for comparison. 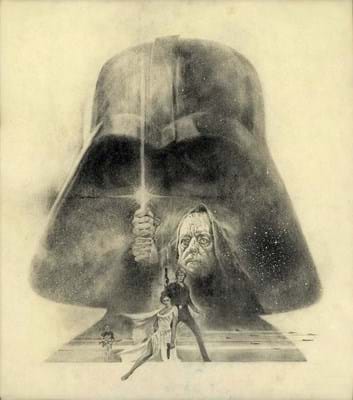 In acrylic, colour pencil and airbrush on illustration board, it is signed Tom Jung to the bottom.

Bonhams said: “After being chosen to create the artwork, Jung was given a synopsis of the plot, descriptions of the characters and their motivations, and set photographs.

“From there he created this spectacular piece that personifies the ‘good and evil’ theme which permeates the film, particularly, according to Jung, the cross formed by Luke Skywalker’s saber set against the ghosted background visage of Darth Vader.” This Star Wars (1977) British Quad film finished poster features a design by Tim and Greg Hildebrandt, although clearly close to Tom Jung’s original concept work. It was issued when the film was initially released in the UK. However, it was then was felt that the depiction of the characters should more closely resemble the film actors, and therefore this version of the poster was discontinued in favour of Tom Chantrell’s artwork. Estimated at £1000-1500, it sold for £4200 at Ewbank’s auction on August 23 last year as part of the Duggan collection.