Two Frances Hodgkins (1869-1947) gouache watercolours painted during her artistic prime were taken to multi-estimate sums at separate UK salerooms in the same week. 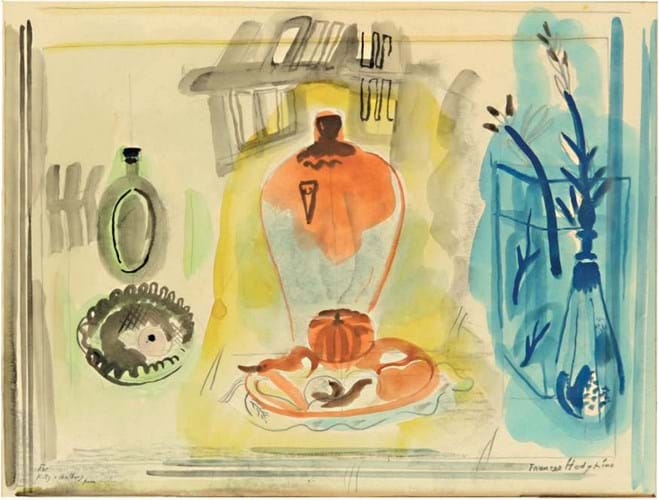 In a sale of Modern & Post-War British art on December 3, west London auction house Chiswick Auctions (25/12% buyer’s premium) sold a 18in x 2ft (47 x 62cm) still-life of vases and fruit from the estate of the artist’s friend and fellow painter Kitty Church and her husband, author Anthony West.

Considered to be one of New Zealand’s most inspiring and influential woman artists, Hodgkins actually spent most of her working life in England and Europe.

By the late 1920s, she had become one of the leading experimental Modern artists in England, despite the hardships she faced as an unmarried woman artist with little to live on.

Cedric Morris, her friend and fellow painter, once said of her poverty: “Her courage was phenomenal. It was something the same as Modigliani did, but it killed Modigliani. It didn’t kill her.”

Her style became increasingly abstract in the 1930s and she began to use gouache, which became a favoured medium, enabling her to combine the opacity of oil paint with the fluidity of watercolour. The gouaches painted from this period are considered among her best work. Hodgkins visited Spain several times throughout the 1930s, spending time at Ibiza and Tossa de Mar where she made a number of landscape studies.

The 19 x 14in (49 x 37cm) work came from the estate of art dealer and British studio ceramics champion, Peter Dingley (1923-2018), who had acquired it from the Ruskin Gallery in Stratford-upon-Avon. It was also inscribed To Eve, reputedly the British artist Eve Disher (1894-1991) who was linked with the Bloomsbury Group.

The London auction was led by a previously unseen charcoal horse study by Lucian Freud (1922-2011) which sold on bottom estimate to an anonymous phone buyer for £40,000.

The money raised went towards the Wormwood Scrubs Pony Centre where he had sketched the work.